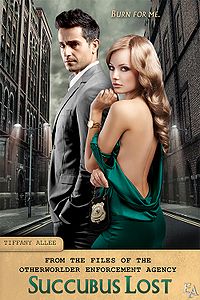 Succubus Lost is an eBook written by Tiffany Allee. It is the second book in the Entangled Ever After series by this author. In this work, the characters Marisol Whitman and her younger sister Elaine are both Succubi.

Someone is kidnapping and incinerating otherworlders beyond recognition, and detective Marisol Whitman, a succubus, races to find the murderer before he claims another victim. But her pursuit is derailed when her responsible younger sister vanishes. Marisol suspects foul play and enlists support from an unlikely source: an agent from the Otherworlder Enforcement Agency, Valerio Costa.

When the trail pointing to everyone from vampires to witches dries up, Agent Costa admits to knowing more than he’s shared. Marisol’s sister’s kidnapper harnesses more magic than she can imagine—and they’re running out of time. To find her sister before her powers are drained and twisted beyond recognition, Marisol must connect the dots between cases and put her trust in Costa, a salamander who may burn her before she can solve either case.

The following review was originally published on Tera's Blog, A Succubi's Tale on September 16, 2014

The most important thing about his work is… family. What you would do for the ones you love more than anything else. Marisol has a secret, one that eats at her every moment of her life and honestly considering what happened to Eliane that’s completely understandable. The darkness of that past haunts Marisol just about every moment of her life.

While she covers that up well, the other thing that she has to deal with, every single day, is that the people around her don’t see her real worth. She’s smart, she is very good at her job, but that is overshadowed by her being a Succubus. That’s a real problem as no one can really see past that and to who she really is and the worth she has.

Marisol is what I think a Succubus can be. She has made a choice in her life, she lives with it, and she doesn’t do the one thing that marks the lesser of her kind. That makes her more than a lot of other Succubi and, for me, that makes the story so much better a read.

Marisol’s sister Elaine is… well, her past is tragic, there was hints of it in the previous work and in that what happens in this work really pulls at you as the story unfolds. The thing is, and really for me it is the only weak part, there isn’t a lot of her seen and more there isn’t a lot of her personality, who she is, or what she was like coming out. There is one, single, scene when Marisol and Elaine talk which for me at least gave a glimpse of her… But I wanted a lot more. For all that Elaine has been through, I wanted to know what she was going through, what she thought and more. It’s a untold story that I think would have given some depth to her and shown how things turn out better.

The story shows Marisol proving she is more than a pretty face, though at times that part of her needs to come out. But more than that, her emotions, her need to find her sister… Those moments for me were the most powerful by far. It’s also telling in how she has to relate to Valerio and what happens when she finds out about his past. In that comes a simple truth, that sometimes you can’t forgive what’s done and by whom. Not all Succubi are like Marisol and that’s more the tragedy as the complete story comes out.

Like the first work, there are a few red herrings for the plot to go through, but not nearly as many. The work reads a lot tighter as well, the plot keeps moving on with not a lot of time spent in frivolous things. I thought that the characterization was better as well, Marisol most of all, she being the main character of course, but even so the other main and minor characters seemed to be more fleshed out, more emotionally connected than they were in the first work.

Between the two works, I liked this one better, not just for the focus on Succubi, but for how the tale is told and the deeper level that this universe is presented. The characters are strong, there is a lot of history told and in all of that comes a story that reveals what happens when you let someone into your life and what they can mean to you.

It really had just about everything I want in a story about Succubi. I just wish that Elaine had appeared more and who she was, not just her history, had been told. Tense, telling, a really gripping read and more. I do recommend this work to see a Succubus being all that she can be in all things.

Again, one final comment, and this is about the cover. The cover I am using in this review is the original one when the work first came out. It’s been replaced, as has the rest of the books in this series, by new covers. To me, the old cover had more of a detective story feel to it than the new cover does. But I suppose that flash sells and the new cover has that. But it does turn me off nonetheless.