Jewish Magic and Superstition: A Study in Folk Religion

Jewish Magic and Superstition: A Study in Folk Religion is a book written by Joshua Trachtenberg. 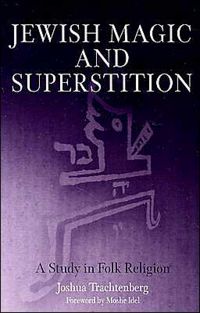 Cover of Jewish Magic and Superstition: A Study in Folk Religion by Joshua Trachtenberg.

In the background of what has become known as ceremonial magic is medieval Jewish magic. In turn this was based on the Kabbalah, the Jewish traditions known as Haggadah, and other esoteric beliefs. This is a comprehensive review of Jewish magic from the 10th to the 15th century, including a rich lode of folklore. Many well-known Jewish traditions are explained, such as why a glass is broken at a wedding, and how the expression mazel tov is related to a belief in Astrology. Trachtenberg deals extensively with Golems, Succubi, the Lillim, (from Lilith--Adam's first wife), and other magical creatures, some well known such as werewolves, and others not so well, such as estrie, mare and broxa. There are detailed descriptions of talismans, amulets, charms, and other curious magical objects. There are chapters dealing with dream interpretation, medical beliefs, necromancy, and other forms of divination. There is also a short glossary, so if you are having trouble telling the difference between a Kaddish and a Kiddush, you're in luck.

The following review can be found in the External Links below:

This is an excellent introduction to the subject of Judaism and magic & superstition.

It covers broad territory - powers of good & evil, demons, holy names, medicine, amulets, divination, dreams, and more - and supplies an extensive bibliography for those interested to continue studying any of the subjects in the book.

What I didn't find in the book is details or flesh - the book has a lot of breadth, but just scratches the surface on each of the subjects. Also, the book gives details about the customs of German Jews at specific centuries, but rarely mentions customs of, say, Jews from Islamic countries.