Born in Wiltshire, England, of British and Irish parents, Zoie Palmer moved with her family to Canada at the age of 9. She went to high school in Newmarket, Ontario at Sacred Heart Catholic High School, and earned her Bachelor of Fine Arts at York University in Toronto, Canada.

Zoie Palmer has previously appeared in The Guard as Carly Greig, a rescue specialist who grew up on a fishing boat, and had a recurring guest role as Patsy Sewer in Instant Star. Other film and television appearances include the TV movie The Reagans as Patti Reagan, and as a woman coming to terms with cancer in Terminal Venus. She was awarded Best Actor at the Baja California Film Festival for the latter role. Palmer also guest starred in the CW drama Nikita in the episode "Girl's Best Friend" as Anya, a terrorist who tries to disrupt a peace summit, and the Canadian television show Call Me Fitz as Laura, an unhinged amputee with plans to start an escort service for disabled people.

She appears in the 2010 Canadian film The Untitled Work Of Paul Shepard with Kris Holden-Ried, one of her co-stars in the TV series Lost Girl. She received an ACTRA nomination for her role in this film. She is currently filming for the Canadian film "Sex After Kids" in which she stars with two of her Lost Girl Co-stars Kris Holden-Ried and Paul Amos. 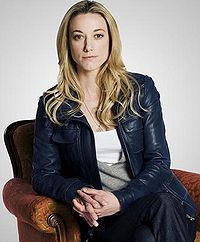 She plays the role of Lauren Lewis, a human doctor who works for The Ash in the series. Through the series, she has become intimately involved with Bo. It was revealed in the second season that she had a girlfriend named Nadia who, through a curse, was the reason for Lauren being involved with the Fae. In the Third Season, it was revealed that Lauren's real name was Karen Beattie, she was wanted for terrorism, and she separated from the Light Fae when she was deceived by Doctor Issac Taft. In the Fourth Season, Lauren was on the run from the Una Mens who saw her as a threat.