For other uses of the word Succubus, or movies involving Succubi, see Succubus (disambiguation). 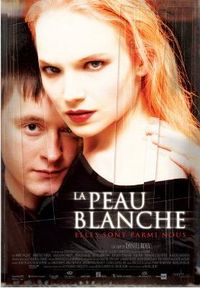 La peau blanche (English title: White Skin) is a 2004 Canadian horror film directed by Daniel Roby. It was released on video in the United States under the title Cannibal. This film won the CityTV award for Best Canadian First Feature Film at the 2004 Toronto International Film Festival.

In this film are characters that are defined as being Succubi. However, they are not in the traditional sense such creatures. In this film, they are referred to as Succubes, a french translation of the word Succubus. The Succubi in this film do not act in the traditional manner expected of them. It would appear that there is confusion over the concept of a succubus, which is basically a female demon that drains energy from men through sexual intercourse. This film makes them cannibalistic in nature, and so they instead actually consume their prey physically rather than draining them of their energy or souls as is the norm.

One evening, roommates Thierry and Henri decide to hire two prostitutes. But the evening turns bad when one of them, a pretty redhead, attacks Henri in the neck with a knife. A few months later, Thierry feels strangely attracted to another red-headed young woman, a music student named Claire. They fall in love, despite Claire's wild temperament and secretive ways. When Claire is hospitalised due to an illness, Thierry meets her family. It turns out that Claire's sister is the one who attacked Henri, and the family of redheads with pale skin has even more troubling secrets...


I don't know why, but I found this movie extremely enjoyable.

I had heard of this movie before, and I saw it on Encore Love on a Saturday night, and I got interested. I started watching, and I found myself being drawn in.

The basic story is about Thierry, a college student, meeting a red-head named Claire, whom he finds he has an odd infatuation with her, despite his dislike of pale women.

Soon, they begin dating, and conflicts arise between Claire and Thierry's roommate, Henri, who was recently attacked by a prostitute (sounds weird, I know). Henri becomes suspicious when Thierry starts acting differently due to his relationship, and Henri starts investigating. Soon, Henri and Thierry discover the truth about the new girlfriend and her family.

The plot is well thought out, and the characters express what the filmmaker wants them to express, whether it's to be likable or the most hated character in the movie. Claire starts out questionably shy, but I then found her to be a nice person, despite her withdrawals at first. Thierry and Henri are both portrayed excellently, as well as Henri's Aunt, who accurately acts as a knowledgeable person in all fields. Marquee, Claire's sister, is also portrayed perfectly, despite her being my least favorite character. She makes you hate her, while enticing you at the same time.

The colors are beautiful. The camera catches a wide palette of bright colors in the background, making you look all around. Bright blues are a prominent color, but there are beautiful yellows and reds, too.

Overall, the movie was flat out great. The ending was quaint and nice, the suspense scenes were just that: suspenseful, and the characters were portrayed perfectly. It isn't a movie I plan to go out and buy now, but if I were to see it on the TV again, I'd drop everything and try to watch it.

Daniel Roby won the 2004 Claude Jutra Award for the best feature film by a first-time film director in Canada.