The Taunting is a 2006 produced and 2007 released to video adult movie staring Katja Kassin and directed by Zenova Braeden. 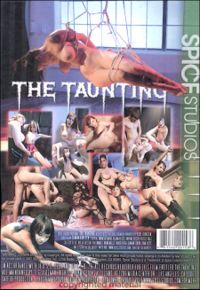 The following review is taken from the Horror Movies.ca website in the External Links below:

Horror has become so big that it seems like it has penetrated (forgive the pun) almost every facet of media. Everybody has seemed to jump on the bandwagon and is trying to do something within the horror genre. It wasn't until very recently that porn industry decided they should try and capitalize on the fast growing horror fanbase. The Taunting is really just that. A film that seemingly assumes that horror fans are only into S&M and goth type surroundings. It is almost like being typecast into a certain group. Its not something that I particularly like and almost felt insulted by it. But I'm a cool guy so in all honesty I didn't give a shit.

When I first went into this I was slightly mistaken about what I was about to watch. The plot of this film has us believe that a young couple travels to this abandoned monastery that supposedly haunted. They go inside trying to find this "succubus" spirit only to fall prey to depravity and sin. So that would at the point where we can expect some of the hardcore stuff to come in right?

Now on the porno side of things which I admit I do indulge in from time to time it does have a couple of hot scenes. The first scene features none other than Gianna who has one of the most fantastic boobs in the business. Her lesbian scene is fantastic and really builds the film up and leads you to believe this is gonna be great. The second scene is a little uninspired and the girl looks like she is just collecting a paycheck. Now scene 3 featured an amazing well endowed Daphne Rosen. She was very impressive but her lesbian costar was just not my type so it kind of ruined the scene. Scene 5 picked it up again with Katja Kassin whom I think just acquired a new fan.

The main thing though that I think was the downfall on this was some of the editing which hopped all over the place. I wasn't really sure what the hell was going on and why at certain points they would cut to a totally different position for no reason at all. Very odd and it kind of takes you out of the scene entirely. The lighting in a couple of the scenes was a little off too. In some of the sequences it would be too much and in others it would just be off to the side for apparent reason.