The Removers is a 2001 American science fiction short film staring Kari French, Kelli Jones and Jeff Tady and directed by Jon Schnepp. The film followed the adventures of a group called The Removers who fought against what are described as evil alien Succubi from another dimension. 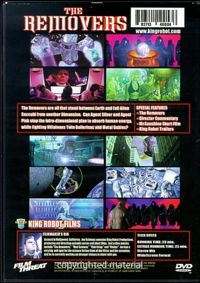 The Removers are all that stand between Earth and Evil Alien Succubi from another dimension. Can Agent Silver and Agent Pink stop the intra-dimensional plan to absorb human energy while fighting Villainous Twin Ballerinas and Metal Babies?

At the time of this article's entry in the SuccuWiki, no review was available.