The Life Not Lived 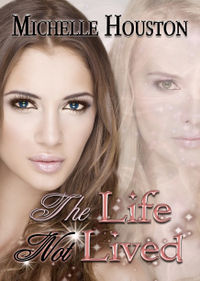 The Life Not Lived is an eBook written by Michelle Houston. In this work a succubus appears to give the main character of the story a chance for redemption with a past lover.

We all have those moments in our lives we wish we could take back.

Natasha has come to regret the choices she has made in her life, the biggest one being turning away from the one woman she had ever loved.

But thanks to a late night visit from a succubus and a magical diary that found its way into her life, she can have a second chance.

If she's willing to take a leap of faith...

The following review was originally published by Tera on her Blog, A Succubi's Tale on March 20th, 2011

Natasha, as the story begins, has divorced her husband and is trying to begin her life anew. As part of that she collects antique furniture to replace that which her husband took when he left her life leaving her their home in an amicable settlement.

In one piece she has bought, she discovers a diary and within it she finds that people can write a wish in it, and they seem to come true, but at a cost to the one that wishes for it. For a time she goes around in circles thinking about that, and the love she once had in her past.

A long time ago, before she met her husband, she was in a relationship with a woman named Lydia, but Natasha at the time found she couldn’t love her back and broke off that relationship Now alone, she thinks about Lydia often and regrets that choice.

Eventually, one night, a Succubus appears in her bedroom and helps her to make a choice about the life she didn’t lead, but wishes she would have.

The thing about this story that I like is that it is stated that Succubi do not consume the souls of humans, but instead feed on the sexual emotions they give. That fits nicely into one of my primary mythos of my Succubi and Incubi, so that part of the story was very attractive to me.

It’s hard to talk about the Succubus too much as doing so would remove a lot of the mystery in the story, so I will only say that as a Succubus, as one that isn’t evil and does’t need to be, I loved her so very much by the time that the story came to its closure.

The author’s words are descriptive, but gentle in nature. It’s not necessary to scream out the moments of passion to convey the passion between the characters and that I think is a rare ability. The scenes are hot without being crass and that is something that I personally enjoy…

Again, this work is one of those that is showing a world, one little part of it, but then closes the door on it leaving so many questions unfulfilled. I would have liked to learn more about the Succubi and Incubi than the short little sentence that explains what they are and moreso, how they came to be in this world…

Lots of questions left behind, would have been nice to explore them some more, and perhaps the author will play in this universe again sometime soon…