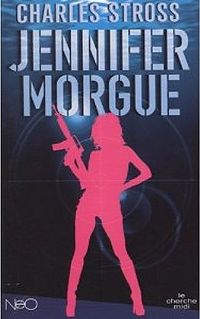 Cover of The Jennifer Morgue, by Charles Stross. Softcover Edition. 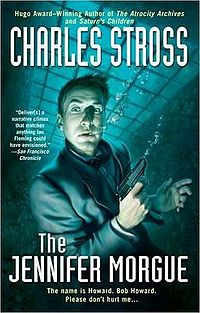 The Jennifer Morgue is a novel written by Charles Stross. It is the second work in the Laundry Files series by this author. In this work the character Ramona Random has a succubus-like being bound to her.

In this alternately chilling and hilarious sequel to The Atrocity Archives (2004) from Hugo-winner Stross, Bob Howard is a computer übergeek employed by the Laundry, a secret British agency assigned to clean up incursions from other realities caused by the inadvertent manipulation of complex mathematical equations: in other words, magic.

In 1975, the CIA used Howard Hughes's Glomar Explorer in a bungled attempt to raise a sunken Soviet submarine in order to access the Jennifer Morgue, an occult device that allows communication with the dead. Now a ruthless billionaire intends to try again, even if by doing so he awakens the Great Old Ones, who thwarted the earlier expedition. It's up to Bob and a collection of British eccentrics even Monty Python would consider odd to stop the bad guy and save the world, while getting receipts for all expenditures or else face the most dreaded menace of all: the Laundry's own auditors. Stross has a marvelous time making eldritch horror appear commonplace in the face of bureaucracy.

The following review can be found in the Amazon.com links in the External Links below:

Like it's predecessor, The Atrocity Archives, The Jennifer Morgue is based upon the premise that all of those nasty Lovecraftian horrors are real, all of the world governments know about it, and are engaged in an ongoing and highly secret occult intelligence gathering/arms race. A few other writers have mined this same vein, most notably Tim Powers in "Declare." But in contrast to Powers, Stross leaves no doubt that his tongue is firmly planted in cheek. The current volume is not only a send up of the cold war spy novel, but specifically of James Bond. Fortunately, Stross has the extraordinarily rare ability to satirize a genre without losing sight of what makes that genre work.

Stross's Lovecraftian horrors are actually scary--in fact more so than those of most other writers who've tried to write serious Lovecraftian horror (which turns out to be surprisingly difficult to pull off). The cold war style intrigue, with intricately layered plots and counterplots also works beautifully. Stross could doubtless be a master of either genre if he could bring himself to take them seriously. But that's alright, because this is better. Much of the humor comes from Stross's hero and narrator, a cynical hacker forcibly inducted into the British occult intelligence service. As such, he is completely out of place in either of the genre's Stross is satirizing (watching him try to fit into a Bond-type plot is particularly amusing), yet in the world Stross has created for us, he is clearly the perfect man for the job. Along the way, Stross manages a particularly sharp (but somehow affectionate) deconstruction of the entire Bond canon.

I'd encourage Stross to drop everything else and devote all of his time to writing sequels in this series, except there's nothing else that he writes that I'd be willing to give up. Still, none of his other work manages to be quite this much fun.