The Devil's Nightmare is a 1971 Belgian/Italian horror film first released in Belgium under the title La plus longue nuit du diable and in Italy as La terrificante notte del demonio. In this film, the actress Erika Blanc plays the role of Lisa Müller who is described as and called a Succubus. 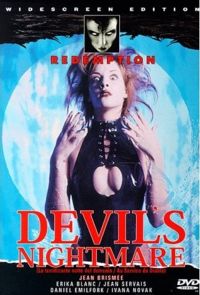 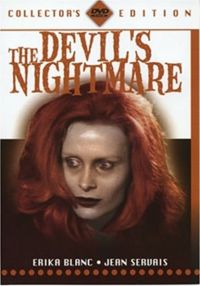 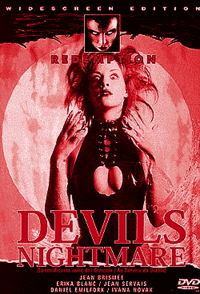 Devil's Nightmare tells the story of a group of tourists who become lost during a trip. They meet a man at the roadside who gives them directions, but it is too late to catch the ferry. They are then directed to an old castle which offers room and board. A succubus also comes to stay at the castle and proceeds to seduce each tourist according to their own personal weaknesses, then kills them, using their own sin against them. Each tourist is a representative of one of the Seven Deadly Sins.

AllRovi wrote that the film "is steeped in spooky atmosphere" but "has little else to offer."[1]

Reviewed by and copyright by Thomas M. Sipos on June 2006.

Mainstream critics made much of Seven (1995, aka Se7en) for its "innovative" twist on the serial killer oeuvre: A killer who took inspiration from the Seven Deadly Sins. Not so innovative. Innovative to big Hollywood studios. Innovative to ignorant mainstream critics. But for those who follow indie, low-budget, and foreign horror ... been there, done that.

More precisely, it was The Devil's Nightmare that did it. Not with a serial killer, but with a succubus (Italian actress Erika Blanc). No reason succubi can't take inspiration from the Seven Deadly Sins while committing slaughter.

In the film (The Devil's Nightmare is its most common US title, The Devil Walks at Midnight its most recent), a family of German aristocrats endures a centuries-old curse. Seems the first-born daughter in every generation becomes a succubus for Satan. She seems not to particularly target family members, so there's no reason this should be a big problem, but the family has long done the right thing by killing first-born daughters at birth. But it's 1945, and the Allies are bombing Germany, and confusion reigns. The Baron (Jean Servais), an officer in Hitler's army, kills the wrong daughter.

Flash-forward to 1971, and the prodigal first-born daughter returns to the family castle.

As luck would have it, that very night a busload of tourists is stranded at the castle. And coincidentally, each tourist is guilty of one of the Seven Deadly Sins. After slinking about in revealing dresses, the succubus begins killing the tourists, one by one. The women too. That's rare for succubi, as most only target men. And she's got help. When she is stymied by Father Sorel (guilty of pride, and played by Luciene Raimberg), Satan (Daniel Emilfork) steps in to help her out.

Being sexual monsters, succubi should be alluring. Erika Blanc is that and more. She is a mesmerizing demoness, with extreme angular features, a fleshy but curvaceous body, and clear bright eyes framed by a flaming red mane. Few modern succubi can compare. Today's direct-to-video succubi (and "femme fatales") tend to be short, scrawny, and disproportionately top-heavy with chicken legs. Perhaps most of today's low-budget producers are "breast men" attracted to anorexic starlets. Blanc is a classy succubus, well-proportioned, the kind that best tempts European (and, I think, most) men.

Personality-wise, her succubus is more pedestrian. Most succubi are heartless monsters, without feeling for their victims. Vampires often have more compassion, or at least passion. Ironically, succubi are often indifferent to sex, merely using it mechanically as a bait and/or method of execution, killing during copulation. But Blanc doesn't even touch her victims, gleefully watching them die from afar. She is an especially cold-blooded succubus, her sole loyalty to Satan.

Some succubi kill to survive, but Blanc kills to win souls for Satan. She kills sinners during their transgressions, ensuring that they'll be damned for eternity. This yields some curious theological results. One young lady is killed asleep in bed, presumably guilty of sloth.

Sleeping in the middle of the night -- Oh wicked woman!

Well, sloth is one of the Seven Deadly Sins. I dunno, maybe it was early evening. Just make sure there are no succubi around if you go to bed early.

Most succubi merely reflect a surface beauty, skin deep. At some point, their natural ugliness is revealed. In the "Demon In Lace" episode of Kolchak: The Night Stalker, the succubus's true appearance was that of a crone. Whenever Blanc kills, her true form manifests: her eyebrows shaved, her face shiny and bluish, her thin red lips in a tight sadistic smile.

My favorite succubus is Karen Morgan (played by Diane DiLascio in the "Black Widow" episode of Poltergeist: The Legacy). DiLascio portrayed a rarity: a succubus-with-a-heart-of-gold. Her succubus had feelings. Feelings that could be hurt by a harsh word. I'd never before seen a succubus played that way. Other viewers must have agreed, because DiLascio's succubus returned for a rare encore episode: "She Has the Devil in Her."

Erika Blanc would be enough to recommend The Devil's Nightmare, but the film is enjoyable all-around. The other actors do a fine job, and the cinematography is lush and colorful.

Welch Everman, in his Cult Horror Films, says: "This Belgian/Italian spooky- castle film is really pretty good, not because the plot is particularly original but because the pacing and atmosphere make it work in spite of its shortcomings." I guess he means the film waits 50 minutes to begin the killings, but he's right, the pacing works. It allows the atmosphere to build, the succubus to toy with her victims, and the characters to become established, if only a bit. (Why do all European actors, when dubbed, sound alike?)

Less kind is John Stanley in his Creature Features Movie Guide: "Campy dialogue and silly premise provide laughs in this Italian-Belgian flop ... Each generation's eldest daughter is born an evil witch lusting to kill." I wasn't laughing, and the story is plainly about a succubus, not a witch.

Foreign film spellings appear to confuse everyone. Welch Everman spells the name of the actor playing Father Sorel as both Luciene Raimberg and Lucien Raimbourg. He spells the aristocrat family's name as both von Rumberg and von Runberg, whereas John Stanley spells it von Rhoneberg.

Mildly annoying to me: In the dubbed version, the characters keep referring to "succubuses." The American Heritage Dictionary (1971) finds this acceptable, but I think "succubi" is preferable. ("Succubae" is also acceptable to American Heritage.)

Dave Zagorski filmed a remake in 2012 under the Mad Z Productions banner. Devanny Pinn and Seregon O'Dassey starred in the film.[2]