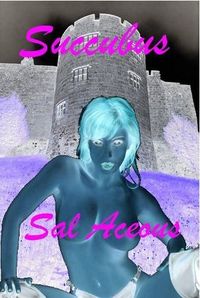 Succubus is an eBook written by Sal Aceous. In this work one of the main characters is a Succubus.

When a dark angel meets a wolf boy under a full moon, things are bound to get dirty, sexy, and bloody.

Reissue summary: A werewolf encounters a succubus intent on possessing his very soul. But she wants his body first.

The following review was originally published by Tera on her Blog, A Succubi's Tale on November 21, 2014

The meeting of a Succubus and a Werewolf takes many turns in this story. While the tale is interesting, there are a few points in it that bother me. First among those is whether or not the Succubus and the Werewolf actually have met before or not. This is somewhat unclear in the story and is confusing at certain points.

The story is a rather violent one, though the characters themselves enjoy things more when they are a bit on the rough and dangerous side. Personally I don’t enjoy violent works, there really isn’t anything in those kinds of stories for me, but the story, if a good one, can overcome that.

Overall the story is told well, but I found it a little difficult to get past the violent aspects and into the erotica. Beyond that the characters are well written, the author tells a compelling story and it was, in its own way, an interesting read. I would have liked something of a longer story however in that there was parts of the past of both characters that wasn’t told and confused me.

Overall well written, a little too violent for my own preferences, and I would have liked a bit more story.