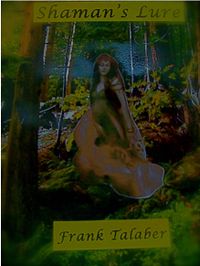 Shaman's Lure is an eBook written by Frank Talaber. The work was originally independently published in 2013, but was reissused by MuseItUp Publishing in 2015. In this work one of the minor characters is a Succubus.

With no clues to either, an enigmatic old native, claiming to be a shaman, shows up swearing he knows the answers. Plays tag-your-it and disappears without a trace.

After a night of drunkenness a reporter wakes up in a part of town he’s never visited and begins investigating why he's having strange nightmares of a life not his. Which begs him to question the validity of the urban myth, when you get drunk enough you don't remember anything you did? Could it be possible there's a place where spirits might take over to have a little fun on their own?

A slain Hell’s Angel returns from the dead seeking vengence and he ain’t happy.

An ancient witch/succubus has been set free from her imprisonment and will stop at nothing to return to our realm. She never was happy.

The streets of Vancouver threaten to explode in gang war.

And for cavalry to the rescue, a boatload of ancient gods arrives. Only they've been out of action for over two hundred years and haven't quite grasped the concept of modern civilization.

So begins Carol Ainsworth’s first day on the job as a detective.

Some days it just doesn’t pay to quit smoking, drinking, or having illicit sex. Or in her case the age old question, how do you find a disappearing shaman who doesn't want to be found.

Which makes staying in bed or engaging in alligator wrestling suddenly seems like a much safer idea, especially as her boss is far less than happy. In fact he's downright pissed, and he hired her.