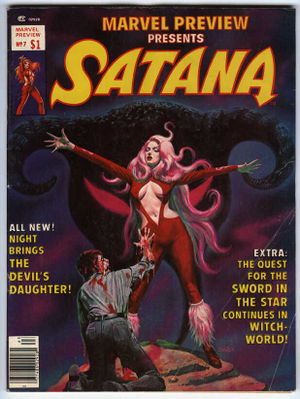 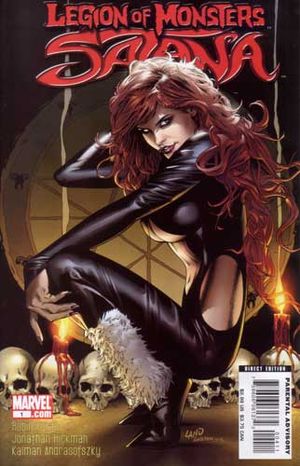 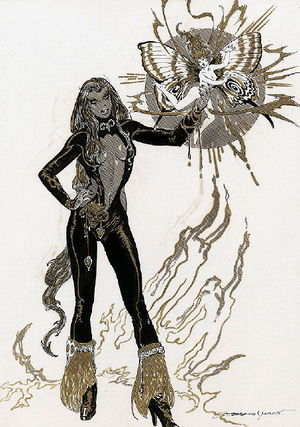 Satana as drawn by Esteban Maroto 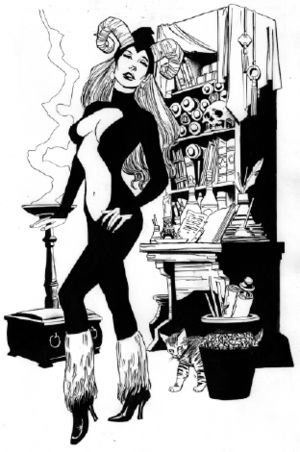 Satana as drawn by Mike Vosburg 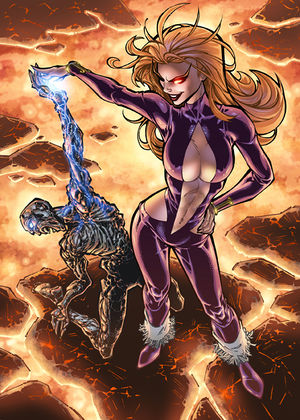 Satana as drawn by Alex Garner

Satana is a fictional character appearing in the Marvel Comics universe. She is the sister of Daimon Hellstrom, also known as the Son of Satan. Satana first appeared in Vampire Tales #2 in October, 1973. She was created by Roy Thomas and John Romita, Sr.

Satana and Daimon were born in the fictional town of Greentown, Massachusetts. They are the half-human children of a demon who claimed to be the Biblical Satan (his true name would later be revealed as Marduk Kurios). Satana and her brother were groomed by their father to be evil, but Daimon rejected these teachings, while Satana embraced them.

When Satana was still a child, her mother, Victoria Wingate, discovered her husband and children's true nature and was driven mad. Daimon was raised by servants, while Satana was taken to her father's particular Hell-dimension (of which there are many in the Marvel Universe) and taught black magic. As a reward for her devotion to him, Satana's father gave her a familiar named Exiter, with whom she formed a close bond. Satana began studying magic under her father and the demon Dansker. In Hell, her soul was bonded with an evil spirit called the Basilisk in order to increase her magical power.

As an adult, Satana was banished to Earth by The Four as a succubus, draining the souls of men. When she does this, the victim's soul transforms into an ethereal butterfly, similar to Psylocke's telepathy effect; Satana then consumes its essence by eating it. She also possesses the ability to gain strength through the use of weapons that were used to kill a living being. In order to do this, she merely places a portion of her own blood on the chosen weapon. She used both her magic and sexual wiles to get the victims she needed, and occasionally came into conflict with her brother and other supernatural heroes like Doctor Strange.

During Satana's first time in the mortal dimension, she was attacked by Monsignor Jimmy Cruz and his band of soldiers. During this battle, Cruz summoned demons called The N'Garai. Exiter tried to fend them off but was killed trying to protect his mistress. Though she was too late to save her beloved Exiter, Satana gained her revenge by killing Cruz and consuming his soul.

Eventually, however, the Demon she had been bonded to began to desire its freedom. The Basilisk managed to put a curse on Dr. Strange, basically turning him into a werewolf. With the help of Spider-Man, Satana was able to free Strange's soul from the curse, but the Basilisk was released in the process, and stabbed her in the back with a sword. Satana died laughing, however, because their life-forces were still bound together. By killing her, the Basilisk had sealed its own fate as well.[1] 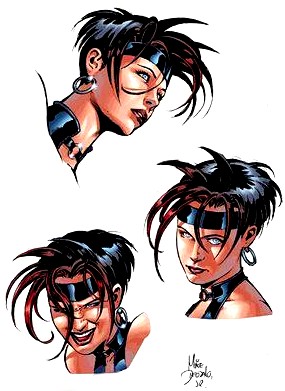 Satana from the Witches series, drawn by Mike Deodato.

As a supernatural being, however, Satana's death was not permanent. Her spirit returned to her father's realm of Hell for a time, until she and a cabal of demons arranged to have her soul (among others) placed into a soulless body on Earth. There she began to build her powers again, preparing to return to Hell and conquer her father's realm.

At some point she apparently died again. In the short lived Marvel series Witches, Satana is resurrected again by Doctor Strange and teamed with two other magic-wielding females to defeat a powerful mystic enemy called the Hellphyr, which was a front for her father Marduk Kurios. According to that series, the three witches formed a coven in order to protect the Tome of Zhered-na (a powerful Book of Shadows belonging to the Kale family) from would-be thieves such as Doctor Strange. 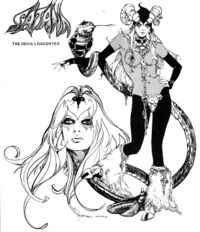 After a brief cameo in Nick Fury's Howling Commandos, Satana has been shown in the Legion of Monsters: Satana one-shot, to have reverted back to her former wicked ways; reaping souls in Manhattan and plotting her father's overthrow from the comfort of a de-consecrated church. Despite her fatherly conflict, Satana revealed that for every mortal victim she takes, she must offer the 10th victim as supplication to her father.[2] The Hood seeks her out to find out more information about Dormammu.[3] Some time after the fall of the Hood, Luke Cage and Doctor Strange attempt to apprehend her for working with the Hood and to get her to join the Thunderbolts. She is initially resistant, but happily agrees when she realizes she will get to work with Man-Thing.[4] 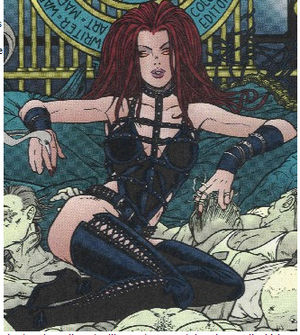 Satana as drawn by Warren Ellis.

She also had a limited ability to hypnotize her victims and control their minds psionically. If she touches an object used to kill someone (like a knife or sword) she can absorb its "blood energy" to become stronger in proportion to the souls the weapon has taken. She also has superhuman strength. For a time, she had the ability to contain the Basilisk, a powerful demon, within her spirit and to release it to do her bidding and then return within herself. Satana also trained in the mystic arts and learned how to cast spells and perform witchcraft. She was trained by "Satan" in the use of her demonic powers.

In a 4-part alternate reality mini-series, called The Supernaturals, Satana is Melissa Ramos, a Catholic girl who is possessed by a demon. She is recruited by a magician named Brother Voodoo, along with alternate versions of Werewolf by Night, Black Cat, Ghost Rider, and Gargoyle to fight a mystical threat. This version of Satana has mystical control over fire, as well as the power to fly. Despite her demonic possession, she has a very pure soul, and was going to be offered as a sacrifice by a demon called the Jack'O' Lantern, until she was saved by Werewolf by Night.