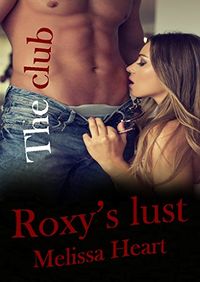 Roxy's Lust: The Club, originally released as Roxy's Lust is an eBook written by Melissa Heart which was originally authored by D.J. Hoskins. It is the first work in the Seduction series by this author. In this work the character Roxy is a Succubus.

Roxy Orrosco is a young succubus with glittering green eyes and a sexy body. Preying on men to live, she ventures into the VIP section of a nightclub and gets more than she bargained for.

The following review was originally published by Tera on her Blog, A Succubi's Tale on January 24, 2017

The series, overall, is the telling of Roxy, the main character, sexual encounters with several different alpha males who she ensnares and then finds herself at the mercy of in various ways. There’s next to no character development for her, there’s little in the way of story, mainly being Roxy mulling over her next target before finding herself in their arms, among other things.

Roxy is a succubus, there’s a scattering of hints that she is beyond her own statement that she’s a “young succubus”, but beyond that her actual powers aren’t really shown. There’s the barest hint of mind control on occasion, but otherwise there’s nothing to point at her being a succubus. She’s more of a temptation, using her sexuality to draw close to the ones she wants before the erotica begins.

Plot wise, there isn’t any, there’s no connections between the four parts of the series. As such, they can be read as stand alone works, having nothing in them which builds upon the last work in the series. The writing needs some work, the books need quite a lot of editing as well, both in grammar and spelling issues that are scattered throughout.

I can’t really say this is a series about a succubus, simply because Roxy doesn’t act like one most of the time. I can’t say I liked the series, because I found Roxy very unlikeable in many ways. She’s a bit of a gold-digger, self-centred and doesn’t seem to have a thought other than who’s going to be having sex with her next. That’s boring to me.

For the series as a whole, I’ll give it one pitchfork out of five.

There’s very little here that even offers the hint of Roxy’s being a succubus, and that’s a real problem also. I hesitate to even describe this collection of works as hot flashes, because there aren’t any. It’s very hard to like Roxy, harder still to want to see what comes next. That’s a shame because there’s hints of ideas from time to time, but they don’t go anywhere. Much like the series as a whole.