She studied ballet with the Royal Academy of Dance and visual art and cello at Claude Watson School for the Arts. She enjoys skiing, swimming, and played goalie for a hockey team that won the Bantam Toronto City championships. She attended Queens University where she completed her BAH in English Literature and Classical History. She has a brother named Jonathan Skarsten. Her parents are Mary Aileen Self Skarsten and Dr. Stan Skarsten. 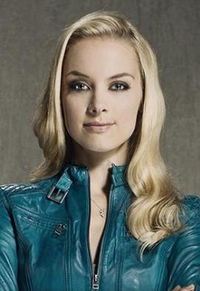 She plays the role of Tamsin, a Dark Fae who becomes Dyson's partner when Hale becomes the Ash at the beginning of the third season. She is a Valkyrie and is a fighting and weapons expert. She has strong opinions and from her first appearance in the series is at odds with Bo, holding her responsible for an attack on another Dark Fae. She hid the fact that she had been hired to find Bo by The Wanderer and came to blows with Bo and her friends, but did have a grudging respect for her. Due to events in the season finale of the Third Season, when she returned in the Fourth Season, she had been reborn into a new life, aging from childhood to adulthood in a short period of time. The end result being that this would be her final reincarnation as one of the Valkyrie.