Paul Amos is a Welsh actor. He was born in Pencoed, Wales and attended the Welsh school Ysgol Gyfun Llanhari. Later he studied acting at the National Youth Theatre of Great Britain and LAMDA, the London Academy of Music and Dramatic Arts. In 2005, he moved to Toronto, Canada and now lives in Stratford, Ontario.

He has appeared in the Canadian television series Lost Girl, playing the role of the Dark Fae Mesmer known as Vex in two first season episodes, three second season episodes and three episodes in the third season. 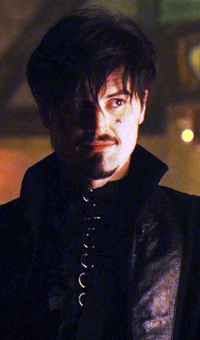 The Mesmer Vex as played by Paul Amos

He played the role of Vex in the following episodes: Season One: Vexed, Faetal Justice. Season Two: It's Better to Burn Out Than Fae Away, Into the Dark, Flesh and Blood. Season Three: Caged Fae, SubterrFaenean, and ConFaegion.

In Faetal Justice he came to odds with Bo over the apparent death of another Dark Fae. This friction continued through the second season episode It's Better to Burn Out Than Fae Away but there is some grudging admiration for Bo from Vex. Vex's arc changed in Into the Dark when he found himself drawn into the battle with The Garuda and broke his ties to The Morrigan.

The second season finale, Flesh and Blood, found Vex as part of the group opposing The Garuda and being made to accept an injection of Bo's blood in order to strengthen Bo's powers. When this happened, Vex seemed to be drawn to Bo and the power she holds within her.

This, along with his departure from The Morrigan meant that when season three began in Caged Fae, his status with the Dark Fae had been destroyed and he was forced to live with Bo and Kenzi. When Hale was made the new Ash he attempted to become Dyson's partner but did not succeed in this. During SubterrFaenean, it appeared that he was beginning to have a friendship with Kenzi and to a lesser extent Bo.

In ConFaegion, The Morrigan used Vex to deliver a parasite into Bo, Dyson and Tamsin and then was told that he needed to kill the three of them to regain his position. However, his friendship with Kenzi had progressed to the point where he decided to not carry out The Morrigan's plans. At the end of that episode, he decided to leave on a journey but promised Kenzi that he would return someday.

At the time of this article, Vex had not returned to the series.