Midnight Madness is a 1993 adult movie staring Peter North and directed by Eric Edwards. It was produced by Dreamland Entertainment. The movie's antagonist is a succubus named Phaedra, played by Tiffany Mynx. Over the course of the film she haunts and seduces Peter, played by Peter North, in his dreams. 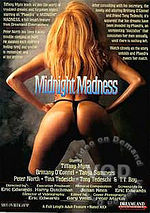 Phaedra is indeed a nasty spirit. This film dazzles you with a tale of a husband and his loving wife. Lately the husband (Peter North) has had a great deal of trouble sleeping. He wakes up in cold sweat, with the vague familiarity of a nightmarish slumber that seems to await him every night.

The misfortune of it all is the fact that he cannot remember his dreams, and so he sets out on a quest to conquer his proverbial "demons," and how right that terminology is. The story unfolds into an ambiguous romance and fuck-fest that is highly uncommon today. This movie is definitely a dream come true.

At the time of this article's entry in the SuccuWiki, no review was available.