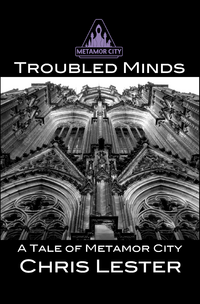 Metamor City: Troubled Minds is an eBook written by Chris Lester. It is described as being the second book of the Metamor City series by this author. In this series, both Succubi and Incubi appear. In this work, a Succubus appears as one of the main characters. The book series also connects to a Podcast called The Metamor City Podcast where additional stories in this universe are told.

Other Works in this series on SuccuWiki

Students are dying at St. Theresa's, a school and halfway house for wayward girls on the Street of Metamor City. Abbey Preston is visiting the school, seeking relief from the terrifying visions that have been plaguing her. Is something supernatural at work, or is it all in Abbey's head?

The following review was first published by Tera on her Blog, A Succubi's Tale on August 4, 2013

Abby arrives at a home for young girls that have been thrown away by their families, by society, by everyone. All that is left is the church that welcomes them. But within this home, there is a terror, and it has, and it causing many of them to kill themselves. Perhaps Abby will be next or will she find the way to stop what is causing the terror within?

An amazingly well done story, wonderfully written, riviting characters and a storyline that from the first to the last is both mystery and self exploration for many of the characters in the story.

One of them, Jenna, is said to be a teifling… but she is, in fact, a Succubus. She has horns and a heat tipped tail and all of the looks of a Succubus, with the power to match. But, and this is why I like her a lot, she is struggling against her own nature to be more than what the world expects her to be. She feeds yes, but she does not kill or harm others and that’s an important point to her.

I won’t spoil Abby’s secrets, or what is behind the deaths, but the reasons make sense, the means to solve the problem is well thought out, and in the end, when the moments come where Abby and Jenna for that matter must make a choice, you care about that choice. That is the mark of an excellent storyteller.

The writing was excellent again in this work, but I have to say that I wished to learn as much about Jenna as we eventually did about Abby. Now, the story is, really, about Abby so that wasn’t likely to happen. Still I have many questions about Jenna and would have liked to have more to read about her… Or another work with her alone would be nice.

Really liked this story, wanted more about Jenna, but otherwise a wonderful read…