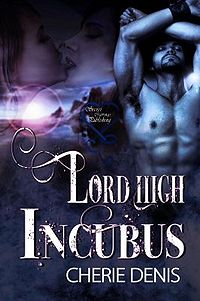 Lord High Incubus is an eBook written by Cherie Denis. It is the second work in the Sex Demon series by this author. In this work a woman named Carlotta has been transformed into a Succubus by an Incubus named Rex and he returns to find her again. The work was released on Amazon.com in April of 2012 with changes to the story by the author.

Rex, lord high incubus and his cohorts go from town to town finding people willing to learn the art of becoming an incubus or a succubus. the training is long and expensive, but they never lack for students. In one town, Rex falls in love with Carlotta, but he sends her out to enjoy her life as an succubus. Many towns and several years later, Rex can't stop thinking about Carlotta any longer and sets out to find her. He is surprised to find she is still in the town where he left her, and she is still the local librarian. They spend a night of sexual excess together and admit their love for each other, hoping to have a future together.

How Rex missed Carlotta. He had no business falling in love with her, but he had, and letting her go had nearly broken his heart. From the day she earned her wings and left him, every kiss he had given a woman, every woman he fucked and sucked was not the woman on his mind. It was Carlotta who should be receiving the things he was doing.

He wondered if she ever thought of him. Did she miss him? Did she desire him? Where was she? Where he had left her? Could he find her?

When the meeting was over this night, Rex was going to send Teal out to find his beautiful Carlotta and bring her back to him. He could no longer wait for her, could not suffer in silence, while the woman of his dreams played with other, lesser incubi. She was his. She was his queen.

The following review was originally published by Tera on her Blog, A Succubi's Tale on April 15th, 2012

It’s an interesting addition to the universe that this author has created in a lot of ways… There is a lot of background about Rex, what he does and why, and quite a lot more really. I did have a couple of issues with the work however…

Firstly, there are quite a number of grammar and spelling and tense mistakes in the work and I wonder if the author might have been better served by having an editor look at the story and correct things a bit. It jarred me from the story in a few places and, really, was a disappointment after the first work by this author.

The second problem I have with the story is that it felt very much like a “paint by numbers” plot. What I mean by that is for the most part I knew what was coming long before it appeared in the story. It also bothers me that, like the first work, there are lots of characters and situations that are glossed over to get to the hotter parts of the story. Those parts were okay, but not quite as well done as the first work’s scenes I think.

Otherwise, I found the story interesting, especially in the reveal of what Rex actually looks like more than anything else. I honestly didn’t expect that. Lolly, the succubus from the previous story actually didn’t seem to have grown as a character since the last story, though there were plot points in the previous story about her that were resolved in this work which was a pleasant surprise…

However, I can only give this work three and a half pitchforks out of five.

Too short again, it needed a good hard editing to tighten things up and make it more readable as well…