Lilim in the Heroes of Might and Magic VI computer role playing game by UBSoft are a Core creature of the Inferno faction, it is the upgraded version of the Succubus. 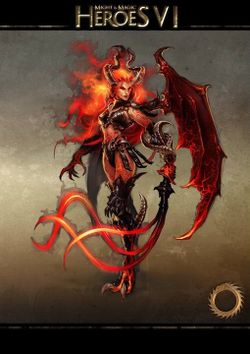 Official Heroes of Might and Magic VI artwork of a Lilim

A Lilim is a Succubus that has become a battlefield specialist. She is a welcome addition to many of the legions of Sheogh. Her powers of seduction have been honed into disarming weapons that make fighting them extremely difficult. A Lilim sees a battle as a prelude to a passionate death, and one might find her kissing a fallen foe as the last glimmer of light leaves their enamored eyes.

The basic shooter for Inferno. Her fire magic attacks wont deal any bonus damage to any creature but does not suffer any range penalties. The inferno army should fight the enemy on their side but if one gets across the battlefield the Lilim can handle her own thanks to her abilities. Remember too not place her and the breeder so close that they booth can be blocked by the same creature.