Last Call was a humor and slice-of-life webcomic created by Megan Steckler and released through Drunk Duck.com. The series began on December 3rd, 2007 and was a featured Drunk Duck webcomic on November 3, 2008. Originally the series updated every Tuesday, Thursday, and Sunday before moving to a random schedule and then being abandoned. The series' final comic was released on May 23rd, 2010.

The series focused on a woman in her thirties named Abby, the antics of her husband and friends, and her conversations with her best friend at a local bar, Lily, who happened to be an alcoholic succubus.

Last Call was created in 2007 by Megan Steckler after she was inspired by a doodle of herself sitting miserably at a bar. She realized that interesting conversations occur in a bar setting, whether drunk or not, and thought it would make good content for a webcomic.

When Last Call launched in 2007, the main character worked at a LAN party room with a pirate theme, which included a bar aptly named "The Poop Deck." The LAN room and its characters were later scrapped to focus more on the events between the main character's husband and succubus friend.

There was no consistent plot or story line within the webcomic, though the occasional story arc is presented, mostly dealing with role-paying games, MMORPGs, and LARPing.

The series came to a close on May 23rd, 2010 after the release schedule became inconsistent. The series did not come to a close, but was stopped in the midst of a story arc. 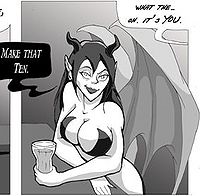 The Succubus character Lily in the Last Call webcomic