From SuccuWiki - The Wiki of the Succubi
(Redirected from K.C. Collins)
Jump to navigation Jump to search

K.C. Collins, also known as Chris Collins, is a Canadian film, voice and television actor. He was born in Toronto, Ontario but now lives in Los Angeles, California. He is best known for his role as Hale on the Canadian television show Lost Girl. He attended Monroe Community College in Rochester, but left school soon after to pursue an acting career.[1] He has appeared in many supporting and main roles in various television series, as well as mini-series and films. 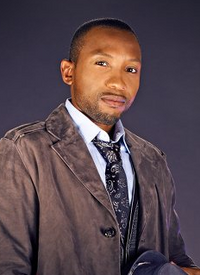 He plays the role of Detective Hale, better known as Hale, the friend and partner to Dyson in the series. Hale is a Siren, a Fae that uses their voice to mesmerize others or duplicate musical notes, and has shown the ability to hear a song and reproduce it exactly with his voice. He comes from a Noble Fae family, but is at odds with his father over his decision to become a police officer. He has a sister named Val who he also has a strained relationship with. Hale has a friendship with Kenzi through the series as well. Hale attempted to become The Ash during the second season of the series, but did not succeed. He is loyal to Trick, and recently discovered that Trick was known at one time as the Blood King. Several episodes of Lost Girl have been Hale-centric or themed. Beginning with the first episode of the third season, Hale has become the Acting Ash after the death of Lachlan at the hands of The Garuda.