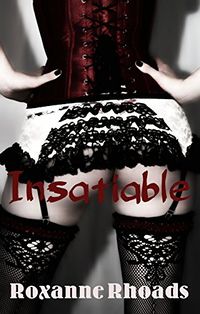 Insatiable is a novel written by Roxanne Rhoads. In this work the character Scarlett is a Succubus.

Scarlett has an extraordinary appetite for sex; a completely insatiable need. Unfortunately, she grew up in a small town where women like her were frowned upon and treated badly-and her sexual escapades did not go unnoticed.

But can love and her unquenchable thirst for sex exist together? Can he accept her for who and what she really is and find a way to let their passions sizzle for more than just a weekend?

The following review was originally published by Tera on her Blog, A Succubi's Tale on March 14, 2017

Scarlett loves sex, she always has. Leaving her home she travels to find another world where being what she is means only that she is wanted more by another. Sex is, for some, life. For others it can be something far more precious.

The story is told from Scarlett’s point of view and in doing so there’s a singular focus upon her need for sex. She craves it, unendingly, and it drives her onwards to all sorts of encounters in every way imaginable. Scarlett is, from the first page, obviously a succubus, though she isn’t aware of this until well into the story, just before the ending. It causes all sorts of problems, eventually driving her from home and into the arms of another, an incubus named Marcello.

That singular focus on sex, not really love as such, means that even with Marcello being an incubus, and wanting Scarlett to be with him, he isn’t developed as a character, his story isn’t told very well. Any revelations are literally in the final few pages of the work and that disappointed me. So much is told about Scarlett’s past, her sexual encounters, hints of what she is come here and here, but in every case, the characters don’t evolve.

The erotica has wonderful heat, the story mixes within the erotica well. The problem is however that so much time is spent telling of the before for Scarlett that the present seems glossed over. Even when something is revealed that Scarlett cannot understand, and they seem to be important things, such as her father, they don’t go anywhere for need to return to sex in the story. I wanted more time for Scarlett to understand herself, not just suddenly be okay with everything and return to her craving for sex at the end of the work.

If this was meant to be the start to a series, the ending does offer that, it presents some paths for things to continue. But as a stand alone work, there’s so many dangling plot threads left at the end that are disappointing, A rushed ending isn’t a good thing, not when so much time was spent telling all about Scarlett’s life before, her needs now and the hint of her future. There’s something not said, almost as if there’s another shoe to be dropped that makes what happens between Scarlett and Marcello something like a dream, or a nightmare, depending on what might, or could, come next.

There is heat, there is need but there’s a seeming lack of character development here. There’s history not told, answers not given. Perhaps the better ending would have been for Scarlett to have her answers. But that’s not what came here.

If this was meant to be a series, the author never continued this story, these characters’ lives. It’s a shame because there is a good basis for a series here and that would have made this something more than it came to be.