Inga Cadranel, also known as Inga Cadrenel, (born April 30th, 1978, in Toronto, Ontario, Canada) is a Canadian actress, and is the daughter of Maja Ardal and Jeff Braunstein, both stage actors, directors and writers. Inga's first stage performance was as "Kayla" in the Young People's Theatre production of The Cabbagetown Caped Crusaders. Following that, she also played "Ally" in the Blyth Festival and Bluewater Summer Playhouse productions of Hot Flashes; and the lead role in the Canadian Opera Company's production of Patria II.

In recent years she has appeared in many Canadian television series and films. She played the role of "Frannie Batista" on the Showtime series Leap Years, had roles in the series Gene Roddenberry's Earth: Final Conflict, Drop The Beat, Relic Hunter, The City, and Foreign Objects. She has also appeared in several made for television movies such as The Big Heist, Sex & Mrs. X, and the short drama, Dear America. She also appeared in the romantic comedy film, The Art Of Woo in 2001.

She has appeared in the Canadian television series Lost Girl, as a secondary character in three first season episodes. She played the role of the Succubus known as Aife and also known as Saskia in the tenth episode of the first season of the series called The Mourning After, the twelfth episode, (Dis)Members Only and the season finale called Blood Lines. 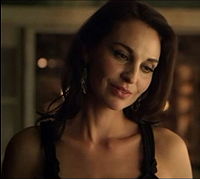 The Succubus Saskia as played by Inga Cadranel

She played the role of the Dark Fae succubus Aife also known as Saskia, in the tenth episode of the first season The Mourning After, the twelfth episode, (Dis)Members Only and the first season finale called Blood Lines.

Aife was a Dark Fae Succubus who was also Bo's mother. She also was the daughter of Trick as well. When she first appeared in the series, she called herself Saskia and did not reveal who she was to Bo when she met her. She attempted to turn Bo towards being more involved with the Dark Fae and their attitudes to humans, but this did not happen. Together with Bo, the two Succubi overcame an Alabaster in her first appearance in the series. In Aife's second appearance, she attacked Dyson and almost killed him, but Bo intervened and managed to save him.

Her third appearance involved kidnapping Bo, and attempting to begin a war between the Light and Dark Fae by killing the entire Light Fae leadership. Bo, with the help of both Dyson and Trick, managed to stop her and she fell to her seeming death from several stories. However, her body vanished before Bo could confirm her death and the last image of her in the series was one of Aife's thralls carrying her limp body down a darkened hallway to places unknown. It was not known if she was alive, badly injured, or dead at the end of that episode. She did not return for the second season and it is unknown if she would appear in future seasons or not.

She did make a brief appearance in the third season of the series when Bo faced the Dawning, but this was an illusion and not an actual return to the series.