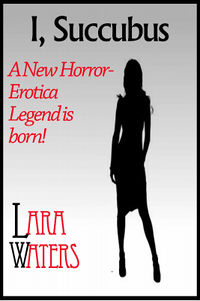 I, Succubus is an eBook written by Lara Waters. In this work, the character Evelyn Petrasson is a Succubus.

A new paranormal erotica is born! Welcome to the tale of I, Succubus - a dark, lusty and comic tale of what happens when a girl discovers more about her sexual appetites then she perhaps wants...

The following review was originally published by Tera on her Blog, A Succubi's Tale on March 11, 2014

It is interesting to me the concepts of what a Succubus is that authors decide on. More, it is how that existence is explained, or used, to drive the story forwards which can either make or break a story.

The problem for me comes in when the explanation of what happens in the story, how the Succubus comes to be isn’t explained or alluded to enough. To simply have her “do something Succubus-like” isn’t going to really do a lot for me. It’s quite a bit worse when, given that the story ends on a cliffhanger, and is advertised as the beginning of a series, that it does not continue and the questions are not answered.

Evelyn is a Succubus, calling herself one of the “Others”, those that are not quite human that exist within the human world. One a month her Succubus takes over and she needs to take the life of another to calm the being within her and continue on. Meeting another in the streets of Stockholm in her moment of need, she takes them and what she is comes to the fore.

The most interesting thing about this work is that Evelyn seems to be two beings within one body. There is a distinct personality shift between the two and it’s interesting to watch Evelyn shift from being concerned about the other to not caring about them. There is a touch of evil in her Succubus self that drives the story towards erotica and while that is done well, I have a problem with it.

How Evelyn as a Succubus takes the other isn’t exactly clear and it seems a bit scattered and an afterthought really when that moment occurs. That’s not to say the erotica isn’t well written, for it is, but rather that the ending was not satisfying because it just… happened. And there the story comes to an end.

The other thing is that the way this work is summarized, I was expecting to find a second part to this work. To discover more about Evelyn, about her world, about all that has happened to her. But there isn’t, at least not to the date of this review at least.

What little there is told about her past, the vagueness of how things progress for her, the questions that I was left with at the end of the story all led to asking… why? Why couldn’t the work be a little bit longer? Why couldn’t the story tell more about Evelyn herself? About the “Others” she refers to? There just seemed to be a lot more that could have been covered in the story to make it better rounded and more interesting than simply some erotica that had a touch of horror within it.

An interesting idea that left me wanting. Too much unexplained or happening that isn’t embellished upon. If there was a second work I think all of this would be better explained, but to this review, that didn’t happen…