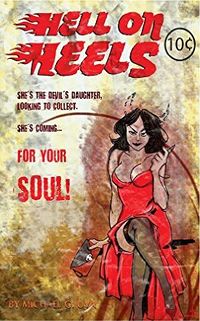 Hell On Heels!: She's The Devils Daughter Looking To Collect! is an eBook written by Michael Uva. In this work the character Lilith has aspects of a Succubus in her persona.

If you think the Devil is evil, try dealing with his progeny! Lilith, the oldest of the brood has been sent on a mission of extreme importance to Satan. If she fails, her birthright will be given up to Alona, her little sister. She has one chance to show her metal. In her case, that usually comes in the form of Stiletto spiked, high heel shoes! You see, she’s a zealous Fashionista! Yes, she’s coming to get you… one way or another! There’s no one that can stop her, except Bruce… The Angel Of Death! Who is about to retire!

The following review was originally published by Tera on her Blog, A Succubi's Tale on July 21. 2015

The book summary is a little bit misleading as, in truth, the story isn’t so much about Lilith but rather what happens to someone that gets involved in situations that Lilith sees to. There’s a lot of mystery about what exactly goes on, who some of the characters are, and what the point of the story is.

But that’s the charm of this work. It isn’t the usual murder mystery or private-eye story, though there are aspect of those themes within the pages. It isn’t a comedy, or satire, though that comes out clearly from the characters, setting and plot as well. It is a quirky story, somewhat odd at times, sometimes quite violent and over the top as well. But more than anything, it is about the characters, how strongly written they are, how independent each is and how they all relate to each other in the most amazing ways.

Lilith, one of the main characters, isn’t quite a succubus, though she has a lot of the aspects of a succubus in her personality and powers. She is quite cruel at times, very much over the top in her sexuality and actions at times as well. But then comes the aspect of her where being the Devil’s daughter means coming home for dinner, now and then, and having to answer Daddy when he calls on her phone. She is a little wild at times, but as well, she’s very calculating, headstrong and has a personality that takes over the pages where she appears.

The work is written a little oddly however in that it reads more like an outline for a television episode at times. Each change of scene is preceded by a note of where things are going to happen and it reads a little bit oddly as a result. There isn’t really chapters in the work as a whole, but rather a series of vignettes that, when collected into a whole and the threads are connected, makes for something quite special.

A strong story, lots of character, a tremendous amount of personality and a series of interwoven themes and lives that simply works. I would like to see where things go from here, there’s an obvious ‘what comes next’ at the end of the book and that interests me.

A unique read and a group of characters not to be found anywhere else.