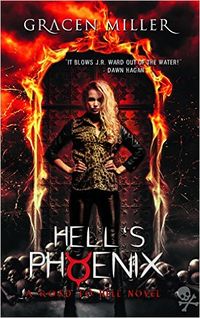 Hell's Phoenix is an eBook written by Gracen Miller. It is the second work in the Road To Hell series by this author. In this work the character Madison Wescott is described as being a half-succubus.

Hell’s become more than just a playground for the wicked…

Going to Hell was supposed to save Madison, but it didn't work. Knowing she’s dead because of his failure leaves Nix Birmingham only one thing to live for. Revenge. With Micah’s help, he learns to use his Messianic power. Anything for Mads becomes his mantra, even if it means killing innocents to gather the power he needs to succeed. A tsunami he unleashes on a Gulf Coast city is stopped with magical interference, and Nix is more than surprised to feel Madison in the opposing magic. If she’s alive, can he and Micah set a trap to lure her out?

Pandora’s Box…once you open it, there’s no turning back!

Madison has done the unthinkable. She opened Pandora’s Box to save Nix from Hell—and failed. She’s willing to risk her own life to rescue Nix, but she worries about the welfare of her accomplice in the mission, and leaving her son behind. Following up on a lead, she’s ambushed by Nix and Micah. Shocked and hurt to discover Nix has become a willing participant in Hell, she’s more certain than ever she won’t escape the demonic fate her husband outlined for her. While in Hell, she discovers that denying the emergence of her succubus is futile, which means getting Nix out of Hell after embracing her inner demon just became a very real dilemma…

At the time of this book's entry in the SuccuWiki, no review was available. Tera has this work on her reading list and will review it as soon as possible.