Fall-From-Grace, in the Planescape: Torment computer role-playing game, is a Lawfully Neutral Succubus who player characters encounter in the game. She can be found at the Brothel for Slating Intellectual Lusts which she owns.

Fall-From-Grace is a succubus, one of the tanar'ri, a creature literally formed of raw chaos and evil, her body and mind the perfect template to tempt a man of any species, any age. She is the proprietress of the Brothel for Slating Intellectual Lusts.

A creature of contradictions, Fall-from-Grace is a cleric but worships no god. She is formed from pure chaos and evil, but is (apparently) lawful neutral with leanings towards good. She runs the Brothel For Slaking Intellectual Lusts, a forum whose staff offer intellectual and emotional stimulation rather than sexual services. Perhaps the oddest of all, she is a beautiful succubus, but is by all appearances chaste. Her kiss is fatal.

One of hundreds of children, Fall-from-Grace was sold by her mother Red Shroud to the baatezu, the tanar'ri's mortal enemies. After suffering years of mental torture, she was able to trick her baatezu master and won herself her freedom.

My past is not a long one, at least by tanar'ri standards. I do not know if you are familiar with the tanar'ri, but we are a race of the Abyss, a staggered series of Planes filled with chaos and evil hearts.

She sold me to the baatezu, the blood enemies of the tanar'ri. I think she rather expected that they would kill me -- despite her knowledge of other subjects, she knows little of their culture and the delight they take in tormenting others.

Fortunately, the baatezu are a proud species. The thought a tanar'ri could best them at anything was something intolerable to them. So I challenged one of the proudest of the balor to a contest of improvisation, and it was here that my tanar'ri heart allowed me to win the day. The tanar'ri are chaotic creatures, wild and unpredictable. The baatezu are more cunning fiends, with orderly hearts. They understand improvisation, but they are not among its best practitioners. And thus, I won my freedom.

That was a very long time ago. I left the lower planes for Sigil. I encountered the Society of Sensation, and my experiences upon the baatezu instilled in me a desire to learn more of the multiverse.

And the more you are revealed to yourself. 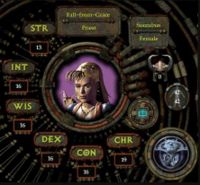 Fall-From-Grace is the source of several important conversations. The most rewarding dialogue can be gained by: