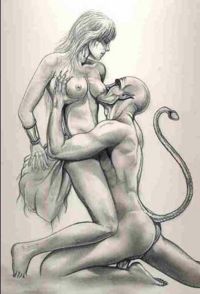 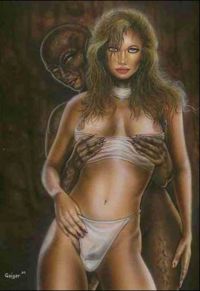 Succubi and Incubi appear in almost every mythology that is known, they are demons that manifest the wishes and fantasies of sleeping or dreaming persons.

The Incubus (lat: the one lying on you) appears in form of a beautiful being of the night that haunts women, drives into sexual dependence and wants to father demonic changelings with his sperm. The Succubi (lat: the ones lying under you) are beautiful women that make their victims ejaculate, and steal their sperm to create demonical beings with it.

Nightmares, certain spirits of nature (Faun, Satyr), Alps and so called Buhlteufel belong to this category of demons. They rob their partner of almost all their energy and also erase parts of their short-term-memory.

Following this, the victims are apathetic and exhausted. With every new sexual encounter the victim is deprived of some more of their soul which satisfies the hunger of these demons. Wounds, spread all over the body, display the use of fingernails and teeth by these beings. Depending on the attitude of the victim, the behavior of these demons towards their victims can be either extremely positive or negative, but will follow the invitation to another sexual encounter without much resistance.

In addition, they possess magical powers that allow them to bend others to their will, to produce magical items, heal their companions, and transform into ground mist. This magic also enables them to make all persons within a range of a few meters fall asleep, transform their rest from a light to a deep sleep, or make them faint.

The psychological background for such cases of possession are restrained fantasies and wishes, that run free in imaginary arousing dreams and visions. This kind of possession can lead to severe depressions when awake, and a physical feeling of complete exhaustion when waking up.

From a psychological point of view, facing ones sexual wishes is highly recommended, which means the affected person must try to question themselves and their wishes and face them openly or even try to live them in real life.

Tradition recommends as an antidote, or protection, to demonic possession or haunting by Succubi or Incubi to hang Verbana and Johanniskraut over the bed of the victim and carve a pentagram into the bed as well.