Demon In Me was a webcomic created by the artist black_lullaby. The series was, and still is, hosted on the smackjeeves.com website. The first publishing date of the series was September 15, 2008 and was soon after abandoned on September 28, 2008. While the artist did produce two pages of the story, there was no actual plot developed.

As a result, both pages turned into title pages for the series. One did show the Succubus Yorumi in her Succubus form with horns and a tail. The creator of the series did list their idea for the series and what they planned, but we never did see anything more of the series regrettably.

It was noted that the series was to contain mature content, that being sexual themes, but never proceeded far enough for such things to be made part of the series.

According to the creator of the series, it was to follow the life of Miki Akurimi. She is a shy, meek, and plain-looking high school girl. After mustering up all of her courage, she wrote a love letter to her crush, but was harshly rejected. Her misery doesn't end there; after crying for the rest of the afternoon, Miki's luck turns worse when she was confronted by rapists! This incident triggered something she would've never guessed existed: her alter-ego, a succubus named Yorumi. Will Yorumi help Miki's love life and raise her self-esteem? 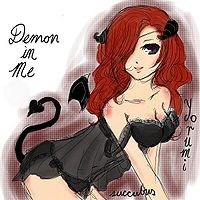 A drawing of the Succubus Yorumi by the artist black_lullaby in the Demon In Me webcomic.

The only characters listed were two sides of the same being. One was human, the other was her Succubus form.

Yorumi is the Succubus of the story. Her human form is just minus the horns, tail, and wings. She is a succubus, a female demon who sexually tempts men, often while they are sleeping.

Miki Akurimi is a shy, meek, and plain-looking high school girl. She is also the human side of Yorumi the Succubus.

An original banner advertising the Demon In Me webcomic.
Retrieved from "http://succubus.net/wiki/index.php?title=Demon_In_Me&oldid=22767"
Category: