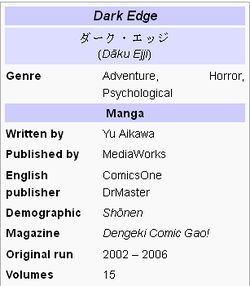 Dark Edge (ダーク・エッジ, Dāku Ejji?) is a horror manga series created by Yu Aikawa. It focuses on a teenage boy, Kuro Takagi, and the people surrounding him. The story starts shortly after his mother's death. Succubi make appearances throughout this series and one of them, Sonobe, is a teacher in the school depicted in the series.

After his mother's death, Kuro Takagi transfers to Yotsuji Private High School where his father is the proprietor. But Yotsuji is no ordinary school. It holds a strange rule of “No students on campus after dark!” On his first day of attendance, Kuro and his classmates inadvertently break the school’s highest protocol and find themselves victims of a faculty zombie attack. Although they manage to narrowly escape, this is but a prelude to more encounters with the undead, especially after Kuro discover his own blood-ties and latent zombie abilities. From there, it's full steam ahead as this dark and intense action/comedy shifts into high gear.