Angel The Demoness was a webcomic series created by writer Ethan A. Cooper and artist Jock Hardesty. The series began on April 6, 2005 and was updated at irregular intervals until May 25, 2012 when the last update occurred. The series was originally hosted on its own domain, but then was moved to a Facebook Group where the series eventually was abandoned. Both the original website and the Facebook Group still exist, but have not been updated since the final update on May 25, 2012.

Angel was a demoness, but described as not being a very good one. Her powers were crippled and then she was sent to earth as punishment, stuck with the most menial of tasks: basic temptation. But then she is charged with a single, violent task that might change her, and the course of the spiritual war, forever. The forces of Heaven, becoming suspicious of Hell for sending a simple demoness screwup to earth, send an envoy of their own to earth to watch over Angel--to protect her even--until the schemes of Hell can be revealed. But all is not as it seems. 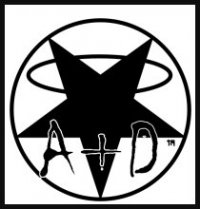 Logo for the webcomic series Angel The Demoness

There are three races in this webcomic's universe as follows

Includes God the Father, God the Son, God the Holy Ghost, and all spiritual beings who did not fall from heaven when Lucifer defied God, taking 1/3 of all the heavenly host with him.

Includes Lucifer and all heavenly beings who fell from heaven when Lucifer rebelled against God the Father.

Includes all mortal beings who inhabit the planet Earth. Humanity can be further subdivided into two groups: the Saved and the Damned. Saved include only those who have accepted Christ’s sacrifice. There is no middle ground when it comes to humanity—if you are not Saved, you are Damned.

No specific powers, but have something that the other two factions don’t have: free will. Can influence the spiritual battle by way of prayer.

Spiritual beings are not omniscient, nor omnipresent. Thus, they only know what they are told. Neither angels nor demons know the grand scheme of their leaders. For the most part, only archangels are allowed to converse directly with the Almighty. The same is true of the Unholy, with only archdemons being in contact with Lucifer.