Get There
By TeraS

Some might think that she should have never done so. She was, after all, the Queen of the Realm. It would have been perfectly understandable if she forgot all about it. Considering how much she had going on around her, missing out on this would have been acceptable.

But not to her. To Tera, it mattered … because she promised.

It was not anything universe-shattering that she needed to do. Nor was it something that was critically important, needed, or could mean the end of everything. Most would think that she could just come up with an excuse, a reason why she couldn’t and, as they say, wash her hands of it.

But no. Because Tera promised, she would get there.

The what it was, the where it was, the why it was … none of that made this anything that absolutely needed to be done by her. Nonetheless, she did so. Because it was how she was. Placing the need of another over her own was … well … just how she was …

She knew—very well—that a kind word, a thoughtful action, a moment where another knew felt well thought of, cared about, and wanted … that these things meant something. They meant something to her. The saying “pay it forward” was there in her thoughts and, while she might be spending more than she was given, that wasn’t important to her.

She would get there.

Her smile, as always, was warm and true. There was never a hidden agenda with her. When she said she loved you … it was forever. When she held you, there was no inner uncertainty whispering that she didn’t want to be there. Those whom she loved were in her thoughts more than they could possibly understand.

Her promise … mattered. It mattered to her when she said she would be there. It meant something when she offered her hand to help, her shoulder to lean on, a moment of her life to just … talk. Were all of those things weighing upon her? She would never tell. To her it didn’t matter how heavy the load, the troubles and tribulations that came. She was there; she would be there again … and again … and again and again, as long as she was wanted.

She had been told that she didn’t need to come, that it would have been fine if she couldn’t make it. She smiled that smile of hers, tilted her head to the right and replied: “There is nowhere else I would rather be.”

It was more than a promise. It was an absolute fact, because she wanted to be there. She wanted to offer a hand, a word, a moment, a measure of being there. All of these seemed, in the grand scheme of things, just small things that only one other would know of.

But she was there. The universe, she was sure, would never know that she had been there. There would not be songs sung about it happening, nor stories told about it, either. She wouldn’t gain a thing from doing … the right thing. It didn’t matter, for she received something far more precious for being there: she kept a promise … one that she need not keep, one she certainly never needed to keep. But she had and she would, again and again, for that was who she was. Her word … mattered.

And a friend might tell her—indeed, often did tell her—that the universe was aware of far more than even the Queen of the Succubi ever realized, that there were songs sung that were heard not with ears, but with hearts, stories told that were whispered into souls by unheard voices, and that, while she might not gain anything, she made all life immeasurably richer every time she did this.

Still, all that mattered to her was being true to who she was. Somehow, someway, she would get there. 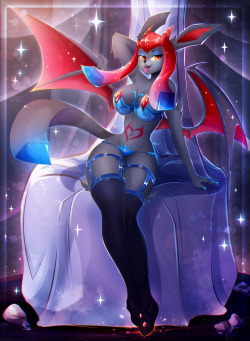