It’s actually not a bad costume except for those horns 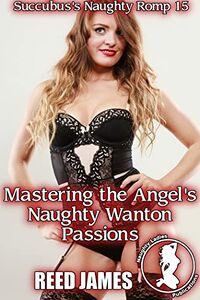 A review today of the fifteenth work in the Succubus’s Naughty Romp series by Reed James. The series has really become far too repetitive by far overall to this point. It’s the same thing over and over again which just takes away so much from the storytelling. Still, there is a glimmer of something new this time and that was for the first time in a very long time, interesting.

I enjoy the creation of mythos in a work. I delight in the exploration of a character’s history and what that means to them and their kind. Most of all, taking a different direction in the expected myths of succubi and angels helps to make a story that much richer and enjoyable a read. But it can’t do everything ti bring a story from being just about sex to something more engrossing.

Trent, the nerdy stud who owns the naughty succubus, has a big problem. Esther, the wanton angel, isn’t happy that he’s freed Jezebel. The angel wants to put a stop to Trent and his sultry succubus’s fun. So he’ll have to master the hot angel’s passions. If he can shower the wanton angel in bliss, he’ll save his succubus from being banished back to hell. Trent’s not about to lose Jezebel. So he’ll use every trick the busty succubus has taught him on the angel.

If Jezebel thought that everything was perfect, Esther intends to prove her so very wrong. There is revenge afoot, angels and succubi don’t get along well, and if both of them aren’t careful, the larger problem will be Trent and his desires.

Things pick up right where they left off with Jezebel realizing that her archenemy Esther is trying to break Trent’s hold on some of his harem and what follows, setting the usual Trent focused erotica aside, is the first point in the series where there is something told of the mythos between succubi and angels.

Now, that telling is from Jezebel’s point of view and it might not be entirely accurate, but it was a fascinating diversion to what otherwise remained the expected scenes of Trent having his way with anyone, and everyone, he wants to. The perspective is unique, it’s different from what might be expected and overall it’s really something very different that I rather liked. It does however open the door to the possible appearance of Lilith in this series and I hope that if she does it doesn’t devolve into being all about Trent again.

While the mythos is interesting, it’s also somewhat sad considering what the angels believe, what the succubi have done, and where that puts them at odds with each other. Given their wants and desires, it seems a terrible thing for both sides of the argument to have to face and battle over, time and time again.

While there is more of Jezebel here, the story remains focused on Trent’s sexual conquests and the harem he continues to build. The erotica has become tepid, the scenes too alike from each other and repetitive. I think the main problem is that there are far too many characters in the story now and having them all have a moment with Trent, or obeying his will, just takes too much from any further character development.

If nothing else, at least in this part of the series there’s a reason for why things are turning as they are. That’s better than what’s been before. Jezebel actually has a chance to tell something of herself and that’s something new. Esther shows something of the angels and that opens some new storylines to explore. But with all of that good, it’s still a story about Trent going wild and it’s really not that interesting which is a real shame.

It’s honestly about time that the series got to explore at least some of the mythos around angels and succubi. It’s different and that could be something going forwards. But there’s a lot of oddities about what was revealed. Still, there was the barest glimmer of something more than Trent’s never ending sex scenes and that has just become a meme and doesn’t do anything for the storytelling. Wouldn’t it be a refreshing change if Jezebel has to do more and be more than what she has been? Wouldn’t it be something if Jezebel and Esther actually confront each other instead of through their proxies? We’ll see what comes next.