A Review of Dancing with the Devil by Annalise Clark 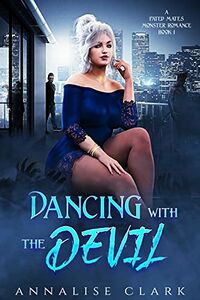 Dancing with the Devil by Annalise Clark

A well written mystery can work in any sort of theme regardless of what that might be. It’s in the exploration of why things are, and how the pieces fit together, that the story can draw the characters and the reader into what follows. A review then of the first work in the Fated Mates series by Annalise Clark this time on the Tale.

It’s not always a story that needs to be more than schemes and plans which provides the anticipation of what comes next. Sometimes what matters are the characters themselves sand what they are seeking. Perhaps figuring out oneself, who you are, why you are what you are, is the mystery that never comes to a conclusion. But it can provide the questions a character needs to solve their own desires.

It takes a special kind of woman to do what I do – kissing monsters. To stare into the eyes of a monster and not flinch was a task in and of itself. But to let one kiss you… to go to bed with one… It was a dangerous job, but a rewarding one when completed successfully. There’s a good reason I’m so good at my job: I was born for this. Literally. I left fear behind me in my childhood. Adult Effie gave no fucks. I was a force to be reckoned with, certainly. But I was in this for something more. Something long-term. A fated mate who would give me something none of the others had been able to provide – love, peace, and eternity to rule by his side.
My own monster Prince Charming, like a needle in a haystack of wicked fun.
So far, I’d been at this for a number of years to no avail. Ever since that first monster came to me when I was 18 years old. Now I was staring down the eve of my 35th birthday and my special someone had yet to appear in my life. I was beginning to wonder if he even existed. Maybe everything that fortune teller had told me was a bunch of BS; stories she made up for naïve people like me because she had bills to pay, too. But if that were true, how did she know about the monsters? Now it would all come to a head with a chance meeting, some monsters who break the rules, and a prophecy that didn’t quite mean what I thought it meant.
My name is Effie and tonight I’m dancing with the devil.

Effie’s world revolve around secrets that should be never revealed. Monsters exist and she’s very much desired by them. They get what they want and Effie gets what she needs. At least until she encounters Xae and the story Effie has been told ages ago might actually be true. If she can survive those that wish her dreams destroyed and her along with them.

The work is a well told story of mystery and the main character discovering the truth about themselves. It’s a very involved and convoluted tale that draws in a lot of secondary characters to tell the tale. While much of the mystery is explained, there are still a number of dangling threads that leave interesting plots left unresolved. The erotica, as does the story overall, dips deeply into the fantasy and monster realms, which work well. There’s good heat in the erotica, particularly between the main characters.

Effie, the main character of the story eventually is found to be part succubus in her nature which actually works well considering what her life has been and where she came from. There is a dangling plot thread about her mother who all signs in the story suggest is a succubus, but that wasn’t explored as deeply as I would have liked.

Beyond Effie herself, there is the appearance of another succubus called Lilith who is very much a schemer from the moment she appears and it’s very clear she isn’t exactly thrilled with Effie getting close to Xae who Lilith has been intimate with. But she is a fleeting presence in this work, and it remains to be seen what she will do going forward in the series. Given her personality, she might not be the best of friends to Effie either in spite of what she’s done so far.

Overall there’s a lot to like in this work and the series which is expected to follow seems to have a good deal of succubus themes and characters to build on. I’ll hope that Lilith isn’t simply a stereotypical evil succubus and that Effie isn’t the lost soul she seems to be much of the time. It’s the growth of the characters that needs to be explored and hopefully that will happen.

As the opening to the series, it’s a good read that offers a lot of threads to be carried forwards. It’s not quite a succubus story however, the political mechanisms that run Xae’s world mostly overpower that. The next work in the series could set aside the larger story to tell more about Lilith, about Effie’s past and what happened to Effie’s mother. It’s that last question that’s the most intriguing by far.