Succubi Image of the Week 780

A Review of A Demon’s Whispers by Vicki Gallus 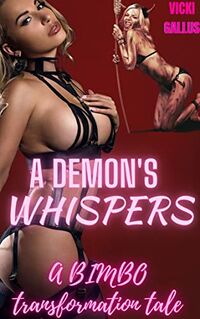 A Demon’s Whispers by Vicki Gallus

Not all demons are succubi or incubi or course. Many of them are close, but don’t quite cross over the line into being seducers more than tricksters. That’s not to say that there isn’t aspects of their character which suggest they could be, or might be however.

Whichever is true, whatever their purpose may well be, there’s a point where the story is twisting a wish or changing a character into something they are not sort of loses its way. It might be better to tell more of why the demon or succubus is there and play that story to the end than just focusing on the erotica over all else.

Hannah’s Halloween is going terribly. Dumped by her dumb jock boyfriend, she is facing Halloween alone. Upset and inconsolable, she heads to her favorite coffeeshop alone. Luckily, there she will meet Gloria. And everything will change. Beautiful, powerful Gloria. Decadent, devilish, demonic Gloria. She has powers that will change Hannah’s life forever. She will say goodby to her plain body, her smarts and her shyness and instead embrace being a dumb, vacuous Halloween hussy!

Hannah isn’t having the best day ever. Dumped, lost and seeking shelter at her favorite coffee shop, there’s a devil in the details and her name is Gloria.

The work, for the most part, is a mix of wish fulfillment corrupted that plays with bimbo transformations along the way. The humor is well played out, the characters have some interesting aspects that are told. But at the core the story is about Hanna asking for something and Gloria turning that ask upside down for her own reasons.

There’s a bit of telegraphing of Gloria’s intentions which tells a lot of her character from the beginning and I’d have liked for the story to explore who she is more than it does. She’s only partially revealed, explaining she is a demon and there’s a bit of an exploration of what that means, but it’s just a tease. Given her focus on sex and sexuality, she could be seen as a kind of succubus, but that’s really not pinned down in the story.

Her purpose is to tempt Hannah and then continue tempting as many others as she can. While that is the point of the story, Gloria never actually appears as a succubus or really does much more than ramp up the sexual desires of others to see what happens and to get deeply involved.

The heat in the story is somewhat tepid, some of the moments are very much over the top, though that’s mainly because of Gloria’s nature. Perhaps it might have been more interesting to transform Hanna to be more of a seductress and have her fall to her own desires than how things unfolded. It’s still an interesting story, I just feel like there are some paths that could have been taken that were a lot more interesting story wise if not erotica wise.

Overall, it isn’t very much a succubus story, Gloria is just a catalyst for everything that happens. It’s a shame that she really isn’t explored much as a character beyond the opening encounter with Hanna as that I thought was really interesting from a theological point of view. As a corruption and bimboization work, that works well. I just would have liked to have a lot more of Gloria as a character explored than there was.