Succubi Image of the Week 774

A Review of The Power of Lust by Skylar Succubus 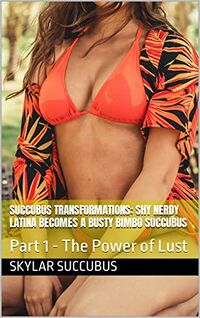 The Power of Lust by Skylar Succubus

The transformation of an ordinary character into becoming a succubus depends very much on the care taken in making that delightfully evil but also so very seductive. It’s not a good thing to rush through to the end when there’s no much otherwise to be told. If the balance is right, that can turn the story from being a series of sexual encounters towards the telling of what is a lot more interesting.

Being given all you desire does not necessarily mean you’ll have exactly what you want. Becoming the desire alone can lead towards being something more or something far less. The need itself however will remain to haunt you.

Carmen is tired of being overlooked. At work and in her dating life. It seems every guy she meets only talks to her to get info about her more busty and curvaceous friend Yasmine. At work the only women getting promoted are the one’s doing ‘overtime’ under the bosses desk. It’s an unfair world for the more shy and reserved Carmen and she’s fed up with it. So when a mysterious man offers her a way to take the opportunities she wants she is desperate enough to accept it.
She doubts that a new necklace will really make an impact but it’s not like it could make things any worse. To her immense surprise though it does exactly what the man said it would do. She suddenly finds herself becoming irresistible to everyone guy meets! The more lustful they become the more power she gains over them. Her powers soon become so strong that even the women at the office begin fawning over her. Eager to please her in every way they can think of.
What Carmen soon begins to realise though is that the necklace isn’t just helping her. It’s corrupting her too. As it collects more lust and she gains more control over others the more she craves the power. Seducing anyone who has something she wants is becoming impossible to resist as her body itself begins to change into the perfect succubus. Can she break free of the spell she is under before it consumes her? Or maybe there is a different ending for her altogether…

Carmen is ordinary and ordinarily ignored. But a trinket might give her what she desires, and that of all those that she encounters. Is it really so bad to be bad? The question means very little when all you wanted is given to you on a silver platter and it will only cost you everything you are.

The work is a very well told mix of transformation, mind control and erotica through which is delightfully seductive in its tone and storytelling. What’s really quite lovely is the choice to draw out the transformations and mind control so that the erotica gains a lot of heat and passion.

It’s not exactly a succubus story at this point however. That’s not to say the main character Carmen isn’t being pushed towards being one. Her physical transformation, the mind control she had over others and how that ensnares herself and everyone else, is very telling in a seductive evil way.

The writing is very good, there’s a couple of points where there seems to be a misused word and there are a couple of minor spelling mistakes as well. None of this takes away from the story however. If there’s one thing I would have liked to be explored more than it was, it would be the initial moment where Carmen finds the necklace. That seemed a little rushed and it might hav been good to pass on the wanting she was given more than it was. But otherwise the work is a really good read and offers more delights to come.

Overall this is a very good beginning to the series, especially in the mind control aspects. While there isn’t really a succubus appearance so far, the story seems to have all of the means to take Carmen towards being one. Hopefully the corruption and transformation will be a slow and drawn out thing. Rushing the story from where things are would be a terrible shame.