A Review of Claiming the Naughty Hot Wife by Reed James 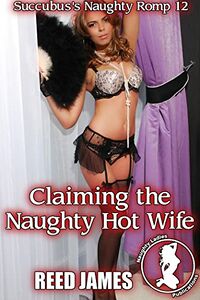 A review today of the twelfth work in the Succubus’s Naughty Romp series by Reed James. I’m not sure of where the story really wants to go at this point overall. That’s not to say there isn’t a clear direction by the end however. It’s more that the story seems to be stuck in a circle waiting to get to the next point to be told. That’s a shame as again, there could have been time spent in telling more about Jezebel and that didn’t happen. There’s not enough story here to make the erotica more interesting than it is.

The focus on a harem story over telling a corruption or succubus one really tells here. It comes back to sex alone isn’t really erotica. When you start not to care about the characters, that’s a real problem to me.

Trent seeks more women to add to his collection and while he does that, Jezebel seeks to get what she really wants. It might be Trent’s soul, it might be something far more devilish. Along the way they both may find they have angered someone they shouldn’t have.

Jezebel became a tease once more, which is a shame. She’s a character that should grow somehow. Be that in a plot, or another plan she’s crafting in the background. Getting to see that beyond the sex she’s involved in really would be interesting. There is, again, a split second appearance of an angel to oppose her, but that’s fleeting and didn’t add anything to the story either.

While the focus is Trent, there needs to be a point where it’s less about him and more about Jezebel and what she wants. Is she creating more succubi? Is she setting up Trent for a fall? Does she know the angel is there and will try to stop her? That storytelling would add a lot more than the repetitive sex scenes.

Another pause in the story telling that focuses on sex that has no heat. Characters that don’t grow and seem fixated on the sex they can get. There’s more beyond this, Jezebel is a storyline that really isn’t being used as she could otherwise be. Hopefully the next part of the series will bring conflict that changes things to the better.