A Review of No Regrets by Pen Ghost

A Review of Dream Intervention by Pen Ghost 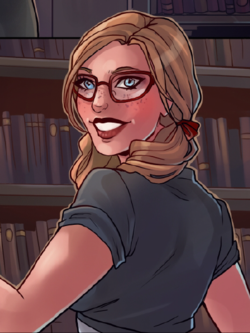 On December 1st the SuccuWiki will be having its 15th anniversary. Yesterday on the SuccuWiki I published the 8,000th article. On each thousandth mark I tell something about one of the Realm’s characters and for this milestone it’s Miriam.

Miriam, better known as The Brightest Yellow Tail Seen In A Century, and the Realm’s Assistant Librarian to Tera, is a Collective Succubi, being known for the brightness of her tail colour and the odd events that occur around her, which are legendary. She is a yellow-tailed succubi; her AngelKitty is named Dewey and her boyfriend is Irving.

Best described as sweet and almost completely unaware of her initiate sexuality, Miriam’s main focus is being the best she can be as a librarian to repay Tera’s faith in her from the beginning of their relationship. The focus of unexpected events when she is nearby, as part of her nature as a yellow tail, is known throughout the Succubi Realm and beyond.

Miriam appears to be in her early twenties physically, having horns and tail of a gleaming yellow colour brighter than any yellow tail in the past hundred years and possibly the brightest yellow colour in Realm history, though historians still debate that point. Her normal scent is lemon, though in some circumstances she has taken on a slight cherry aroma when she is sexually aroused. She has medium-length strawberry-blonde hair which she ties up with red ribbons into curled ponytails over her shoulders. She normally wears red-framed oval glasses through which her lovely violet eyes can be seen. Both the red ribbons in her hair and the red rimmed glasses are nods to her mentor, Tera.

Miriam tends to appear somewhat shy in her personality and looks. While she is one of the succubi, her sexuality doesn’t drive her personality as it does others of the Realm. While outgoing and more than willing to be helpful. This reflects on her librarian role, although she is, nonetheless, still attractive to others. She usually appears in muted tones and colours which lend themselves to her librarian role. Preferring low heels, pencil skirts, and short-length bolero jackets over top of a yellow or white fitted top, she projects an air of cute sensuality of which she is largely unaware. She has a collection of costumes in her office in the library, which she chooses from on a weekly basis when she reads stories to the young tails of the Realm. Many of them are made of latex, likely being slightly influenced by Tera’s own preferences in that fashion choice.

Miriam has an openly cute and outgoing personality, which makes her an eager and attentive student willing to learn new things. While not overtly sexual or seductive, this does mean that, for the most part, others saw her as cute-but-weird, or maybe as a close friend but not necessarily sexy for some time before joining the Realm Library and coming under Tera’s mentorship. Occasionally unsure about herself when seeing the others of the Realm, she has learned about herself, what she likes, and—in the case of Irving, her boyfriend and co-worker at the Realm Library–whom she loves. Her adoration of Tera, along with Tera’s encouragement, helped to bring her from a young intern at the library into the confident assistant librarian she grew to be. But with all of her growth and abilities, she still sees herself as not being like the other succubi in their sexuality, even though her sexuality and seductiveness has blossomed over time.

Miriam has all of the innate powers and abilities of the Succubi in the Realm. She can change her form if she wishes, though—much like her adored mentor, Tera–she does not do so. At most, she will use her powers to shift the clothing she wears into different looks and styles if needed, but her personality and nature tends to make such changes cute with an undercurrent of sexuality that she does not note. Being a yellow-tail, the greatest power she has could be described as being able to influence events in odd and unexpected ways. For example, she is probably best known for being the focus of an event whereby the entire Realm found themselves in physical contact with their TailSelves, something that was thought to be impossible, and then bring entwined with them and their loves, the event spiralling out of control until Miriam and her TallSelf Marilyn were able to find a solution and bring the Realm back from the whirlwind they had entered.

The only daughter of her mother, a teacher, and her father, a philosopher, Miriam spent her formative years being taught the whys and ways of the Realm by her attentive parents. Never without a question, and having at a very young age read all of the books in their home, Miriam was introduced to the Realm Library by her mother. This opened the door to her future. Though very shy and something of a bookworm in her younger years, she adored the Library, spending every moment possible exploring the treasures within, sometimes to the dismay of the staff, who worried about a yellow tail being let loose within the walls. Regardless, Miriam’s world revolved around the library and, when the time came for her to consider her future, she had only one goal. However, gaining an internship to the Library took three tries, the first two bring rejected due to her being a yellow tail and the staff’s concerns about the Library’s collections. On the third attempt, Tera intervened in the deliberations to gain Miriam’s acceptance.

What followed was Miriam growing from being shy and uncertain about herself and her worth, to blossoming into her true self, both as one of the Succubi and as the librarian she desired to be. While becoming the assistant librarian to Tera’s role as the head librarian, along the way Tera’s encouragement, along with that of her TailSelf, Marilyn, brought her to encounter Irving, a shy and unassuming member of the Incubi; they soon became a couple, looking after the library together. As time passed, Miriam had many adventures within and outside the Library, many of them being a direct result of the effects of her being the brightest of the yellow tails of the Realm. But, with all of her growth and experiences, Miriam still doesn’t quite see herself as being overtly sexual or seductive. While not a real problem for her, there’s an undercurrent of cute mixed with a hint of sensuality which is attractive to many and which Tera adores.

Marilyn is Miriam’s TailSelf, a silver-tailed Succubi with chestnut brown hair and very violet eyes of a deeper colour than Miriam’s own. Far more direct and open in her sexuality, Marilyn has a glamorous, predatory nature about her, in complete contrast to Miriam’s own shy and almost completely unaware realization of herself. It is Marilyn’s focus to get her librarian other-self to loosen up a bit and discover just how sensual she could be. Marilyn was responsible for Miriam painting her tail with rouge once before Halloween and turning Miriam into a red-tailed member of the Succubi, still having yellow horns, with long purple hair and an insatiable sexually dominant nature. In the aftermath, Marilyn decided that perhaps being a little gentler in her approach would be better, considering both how Miriam was the brightest yellow tail that had been seen in a century and all that occurred around her.

Miriam has an AngelKitty called Dewey. She appears to be a dark brown Tabby cat with similarly coloured wings who is very outgoing, regularly seeking attention from visitors. Given that the association of cats with libraries is well known, Dewey’s association with Miriam and the Realm Library makes a great deal of sense. Her human form is that of a young woman in her early 20s, appearing to be younger than Miriam. Her physical form is somewhat gangly with brown eyes and light brunette hair in a pixie cut. Dewey’s relationship to Miriam is mainly as an assistant in the library, to help with the many of visitors who ask for help, befriend them, boost librarian morale, and inspire reading. Outside of the library, she tries to encourage Miriam to be a bit more adventurous and explore her sexual nature as it matures.

Something different here on the Tale, someone my heart brought to life in his words and brings me no end of joy always…