A Review of Queen Succubus: Darla and Silvanus by Leith Brooklyn 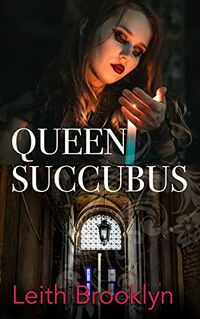 In the telling of a story, things can be rushed to the point where the characters don’t quite have the chance to be all they might otherwise become. The erotica is rushed, the character development feels wanting. The story might get to a point where it offers a hint of something more, but really doesn’t.

Sometimes what isn’t told matters more than the story itself. Given that point, sometimes a story described isn’t nearly the story that lurks within the pages.

arla Lugosi, fallen movie star, dreams of a supernatural lover, while stuck in the mortal coil.
In the mundane, human world Darla has done it all, singer/actress/political activist, she has an extremely powerful and magnetic personality that has gotten everything she wanted in life. But now entering her forties, she has been married and divorced and has had her share of carnal fun, but now she’s looking for more. At six feet tall and internationally famous, most human men are barely a blip in Darla’s life, unable to hold her interest.
Meanwhile, in a dark underworld Silvanus the incubus is tired of the nubile prey that he usually feasts on. He dreams of finding the succubus to his incubus, and he thinks he may have found her when he first lays eyes on Darla Lugosi.
Have they finally met their match?
Or are they a match made in hell?

Darla has worked to have everything she desires. A call and her needs are met, crowds wait for her every word. But something is missing. Silvanus commands his domain, but the pleasures of the flesh are not nearly enough to fill his need. The draw cannot be escaped between them and what cones from desire isn’t something to be ignored.

Darla, the main character of the work, controls what is told and the tone of the story. She’s the focal point of everything, which works to tell of her needs and desires. There is a moment when she is wrapped in the trappings of a succubus, but doesn’t do much with having an inkling of the powers involved and as such the chance for her to actually become a succubus feels thin.

Silvanus is very much an incubus, dwelling in the dreamscapes of others. The telling of that interaction was interesting and offered a lot to build on. He isn’t evil as such, more a sexual force bound to the universe that I thought was rather unique.

The story’s tone is more of a description of events than the characters being wrapped within them. As such there’s a lack of emotion at points that really didn’t allow the characters to become something more. Beyond that, how the story rushes from point to point just left something missing out of the work overall.

The core of a larger and more involved story is here, but really doesn’t get the chance to be all it wants to. Overall, the author might want to have a look at what they have created here and take both Darla and Silvanus into a more complex story. This is really a tease of something more that just didn’t have the time to tell things better. It’s a real shame that didn’t happen.

It’s too short for what the characters offer, which is the shame here. Taking the time to express them more deeply, tell of their passions and give more to the becoming of Darla would have really made this so much better.