Succubi Image of the Week 771

A Review of Demon Harem by Elliot Silvestri 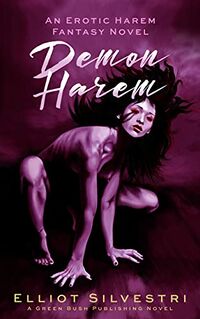 The mystery of one’s past can provide the opening to interesting plots and characters within a story. It’s what comes beyond that point, whether transformation, erotica or other paths, that make things more of a journey. Given a choice however, perhaps telling a story beyond the sex might be a good place to start.

Coming into one’s powers isn’t going to solve all the issues you have. Complications will arise, the past will come to envelope you and what you think is real, might be the illusion you never wanted to admit was really there.

I learned a lot of things when I turned twenty-five. Women were more attracted to me. I could do simple magic. I was a wonder in the bedroom in more ways than one. And it was all due to my father’s heritage, I was a demon. Well, a half-demon. But getting women into bed easily was only the start of it. There was a lot more to it.
Sex. Women. Lots of women. Deception. Violence. Everything worth living for.

Seth has a problem and it has everything to do with women. Finding out that he’s a sex demon is a surprise, more so the succubus that reveals that truth to him. But it gets more complicated with all of the women that want him now. What’s worse is that his own nature is making decisions for him and they aren’t exactly for the best.

The work is mainly a harem collection work with a incubus (even if he doesn’t say he is) transformation along the way and all of the complications that come with it. While there are some character development and some interesting plots, the core of the story is Seth’s newfound nature and how much sex he comes into.

The erotica really doesn’t have a lot of heat to it, tending to have the same sort of things happening with each of the woman that Seth comes into contact with. If the story was about the erotica alone, there wouldn’t be a lot here that would be interesting.

It’s the appearance of Killeen, the succubus of the work, that turns the story in some interesting directions and scenes. Fully a succubus, if not quite fully evil, she’s focused on sex and all of the fun and games that come along. The scenes with her transformations are well done and her personality is really quite delightful and captivating. Killeen ties the story together in many ways and she gives a lot of life to the story when it’s needed most.

Seth, who is constantly describing himself as a half-demon, seems very two-dimensional in comparison. He focuses on the sex most of the time and while that’s the core of the story, when the moments come when he tries to figure himself out and begins to get sorted out, the story falls back into the sex again.

It’s a shame overall because what little hints are given throughout the story. And how Killeen pushes and pulls on him, needed to be explored more than it was. Sex alone doesn’t really tell a good story, it’s the character development that does for me and there just didn’t seem to be enough.

That said, the collection of harem characters does grow over time, becoming far more interesting as the story is told. Their backgrounds, how they change with Seth’s involvement, and how they relate to each other I think works well but needed to be explored more. Again the problem is the erotica that comes into play before the story realty gets to tell their story well.

The climax is where the story lost me, whether that’s because there’s a part of the story missing or it’s intentionally written that way I’m not sure. That said, having a battle between two characters go on for pages and then suddenly a third appears to claim they removed the threat doesn’t work.

It’s an interesting overall story, though it really doesn’t make use of Killeen as much as I wanted. There’s still some good mystery to explore beyond the harem themes and perhaps the author will try to get into that should there be a second work. I think there’s a good start here, hopefully it will lead to something better.