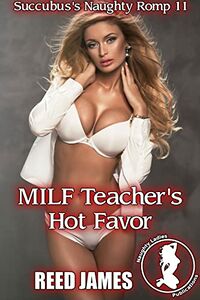 Sex alone isn’t really interesting, not even for a succubus. If the characters aren’t evolving, or the story doesn’t move towards the series climax, shouldn’t it do so?

Trent continues to have his way with Jezebel looking on and encouraging him. He might be getting all he desires but there is a cost brewing too. Sometimes getting what you want means someone else doesn’t and you never know what they might do.

The tone of the characters, the dialogue they use, and how things are described, felt very repetitive despite the situations being different. Overall, the story became boring, and my interest wandered more often that I wanted it to.

Jezebel’s arc didn’t move very much overall as well. She acted as a means for Trent to get what he wanted, she teased others at times, but there wasn’t a lot else that happened. The threat to her plans, which still aren’t explored, made herself a bit more known, the means to oppose her is a bit clearer. But there wasn’t much for her to do that interested me. There is a lot of character arc in Jezebel that isn’t being exploited towards making this work more than the ongoing number of erotic scenes. I don’t think that is doing the story or characters any good overall.

At some point the story needs to move towards Jezebel revealing her plan or taking things into her hands to get what she wants. A mention in passing of what her goal is doesn’t explore her character and how evil she really might be. I’d like to just have more time spent in telling Jezebel’s story than continually returning to Trent and his next sexual conquest.

The story is turning very much in the same direction that a number of works by this author with a succubus theme have gone. I’ll hope that the story takes Jezebel towards something different than the others have ended up at. Certainly, turning towards more character development as happened in this part of the series will help, but there’s still a lot of story to tell beyond the tepid heat of the erotica.