It’s cute, but there’s a catch

A Review of Succubus Rage by Thaddeus Black 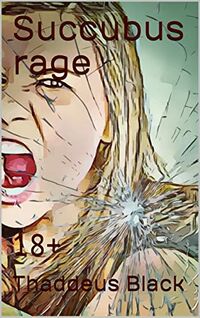 It’s interesting to note the different mythos that authors create about succubi and incubi. Perhaps one the rarer concepts is that of their nature and what effects it has on what drives them to seek out what they need. In that need comes the realization of what they can do because of their physical abilities.

In that wildness within themselves there is a danger of course. It puts them on a knife edge which can be something so very passionate, but also so very dangerous as well.

Jonnie just discovered what he was, he’s an Incubus, and it’s now it’s his job, to bond with a harem of Succubuses. It turns out not to be as easy as he had first hoped. Succubuses are the most powerful of the paranormals, and the bonding rage that they go through, incubuses are the only ones that can survive the violence of the bonding.

Jonnie has a problem, and it has everything to do with him being an incubus and all of the succubi that want a piece of him. It’s not all fun and games, and it’s going to be a pain in his ass, and other body parts, but it really can’t be all that bad, can it?

The work is mainly a harem adventure with some erotica. It’s very focused on Jonnie and through him the story is told. Overall, there is some heat that appears as each of the succubi appear. But there is a lot of violence which took away something from the overall heat and storytelling.

The work also uses succubuses and incubuses rather than succubi and incubi, which also kept taking me out of the story. The work could use an editing pass to clean up the dialogue and storytelling as well. It’s a bit odd, the dialogue seems lifeless at times and adding more emotional connections would have helped.

I really couldn’t get into the story because of all of the abuse that Jonnie goes through. The story overall is interesting and has a unique mythos which has its appeal. Perhaps more time spent in the details of the relationships, of the succubi beyond what’s told could have made this a lot better than it is. I understand why there’s the focus as it is, but it doesn’t appeal as much as I wanted it to.