Succubi Image of the Week 767

A Review of Dahlia’s Kiss by Candace Adams 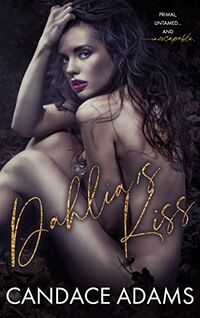 Harem stories don’t necessarily work for me. There’s a point where too many characters appear, there are too many conflicts and the story gets bogged down in the minutia of what tugs at the characters. If the story can keep from going off the rails, there’s a good chance that the story will be more than I expect it to be.

A lot of that comes to the main character, what the mythos in the world is, and how the plot gets resolved. There will be strife, there will be conflict, but at some point there’s the question of trust for everyone involved.

Before humans ever discovered fire, a bond was forged between the Succubi and Incubi that burned hotter than any flame. When they found their true mate, the need to feed from humans would be forever replaced by the one who completed their soul.
My parents were fated mates – two who should have completed each other beyond eternity. Fate is fickle, though. That eternal bond ended and took my parents with it, victims of their own natures. When an Incubus comes to seal our bond, I wanted no part of it – determined not to fall the way my parents had. When two more appear to claim their right as my mates, it becomes harder to ignore the instinct to be theirs.
Maybe I didn’t have to choose, but just as I start to give in to their desires, someone begins killing the humans who’d sustained me in the past. As the Incubi accuse one another in a play to be my only mate, the end of my eternity draws closer than ever. I do know this for certain, I need to uncover the truth before the next victim is me.

Dahlia enjoys her life as a succubus with all the passion and lust the humans she encounters brings. Not one to be tied down, except when someone is really kinky, having an incubus appear that claims she is his mate is a problem. It’s more so when two more appear claiming the same. Where things really go off the rails is when the humans she has been intimate with are killed off one by one. The mystery that lurks will reveal secrets about herself and the incubi around her that will forever change them all.

The work is a rather complex mixture of erotica, mystery and reverse harem themes that works well in the telling of the story. The erotica burns well through the story, the characters have a lot of depth. The mystery takes a long time to be resolved, which brings with it a lot of conflict for all of the characters.

Dahlia, the succubus of the work is snarky, not really caring to be tied to anyone or anything. She isn’t a stereotypical succubus, there are no horns or tail to be seen. She doesn’t feed on souls or kill, sex is her sustenance and that works really well. There’s also a hint of mind control that appears in some scenes that fits with her overall character well. She’s a very complex character, her backstory is very telling and explains a lot about her and it works well to provide the drive she has throughout.

The three incubi of the work, Sterling, Cole and Damian are similarly very unique from each other, their personalities couldn’t be more varied. As such, there’s a tremendous amount of friction between all of them as to how they all relate to Dahlia. It’s this part of the story that provides many of the misdirections that occur and push Dahlia to make some questionable choices.

The mystery itself as to who is responsible for the deaths around Dahlia, has a lot of red herrings as a result of the incubi doing really odd things or not thinking about what they are doing. Because of this there’s a lot of scenes which devolve into yelling and anger between them and Dahlia which takes over a lot of the story. It builds tension of course, it makes Dahlia question everything and everyone around her. It also serves to have Dahlia make a lot of questionable decisions as well.

There comes a point where the three incubi pop in and out of the story so often and create so many issues that I felt somewhat let down in the storytelling. Nothing is perfect of course, and the tension needs to be there, but there’s a point where Dahlia’s choices don’t make a lot of sense with her personality. I do realize that’s all for the plot, but it took a lot of the enjoyment away from the story in seeing the incubi fight over and over again and Dahlia making some really poor decisions that pull her in deeper.

Written well, there’s some hints of world building around the edges of the story that didn’t go very far. The climax is very over the top at points, some of that being really off putting, but considering the character at the heart of the mystery and what they are it needed to be. I would have liked something more to the ending, it felt very rushed and I think that could have been more in telling what happened to Dahlia and her mates, where their relationship is, and give more hope and love than what’s told in passing.

Overall, the one thing that bothered me the most were the vast number of red herrings and misdirection. With everything that was going on there came a point where it just didn’t work for me and I waited for the reveal to come. The work ends on an interesting note which just begs for a follow on story. That would be interesting and I hope it’s more focused on the characters, the transformed relationships and the hidden world that isn’t explored here. That would be really interesting to see.