It’s a better idea than a wig overall

A Review of Suddenly Succubus by K.T. Daring 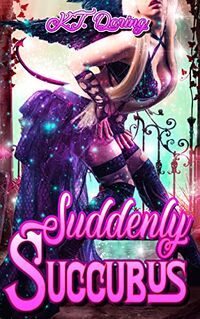 The theme of a character becoming a Succubus can be told in many ways. The most common are the stories in which it’s like a switch is turned and they have only one thing on their minds. That’s rather disappointing, not the least being that much of the time the character really isn’t who they were any more.

I’m of the opinion that sex alone really doesn’t make for an interesting story. When the sex gets completely in the way of what otherwise could be a really interesting story, that’s disappointing. Becoming a succubus is more than sex, it’s more than just becoming a plaything for others as well.

There’s a demon in my bed who is too hot to handle. Oh wait, that’s me. My name is Harper, and I just turned eighteen. Oh, yeah, I also just found out I’m a succubus, and now, I’m yearning to scratch my new itch. But for that to happen, I’ll have to find an incubus to play with, first. I can’t wait to fill my naughty tummy with some demon seed, even if I end up bumped in the night. I guess playing with fire runs in the family, but I’m ready to get burned.

Harper has a problem and it’s the fault of her parents. The time has come for her to shed her humanity and become the succubus she was meant to be. However, a succubus has her needs and Harper might do, or say, anything to have them at last.

The work is told from the perspective of the main character Harper, who quickly shifts from being human into her succubus form and all of the need for sex that comes with that. As such there’s a lot of internal monologuing mixed with her almost constant narration of how much she wants to be taken by someone.

Harper herself as a character begins as being interesting, but as the need grows she sort of loses herself to that and just thinks about sex constantly. It becomes a one-track thought and sucks away a lot of what otherwise could have been some really interesting character development.

The two incubi of the work, Bael and Balam, Harper’s father, are very much two-dimensional. Balam appears for a moment, displays his dominance and then disappears with Harper’s mother. Bael really only cares about making Harper his mate, his attitude being that overall else. The incubi, overall, are just means to an end, that being Bael having sex with Harper. There is the smallest level of character depth to Bael which was disappointing.

The erotica has some heat, but it’s very much adult movie levels of that. The emotional connection between the characters doesn’t feel that strong and that takes away from the story overall. Given that the majority of the story is grounded in the erotica, I wanted something more than the sex to carry it.

There’s a number of points where the story could have spent more time on Harper coming to terms with herself. Her father could have been in the story for more than one page. Bael might have been more than being with Harper for the sex alone. It doesn’t need to be a romance, it really does need to give more story than happens. Harper’s questions are for the most part left unanswered, the mythos of the succubi and incubi isn’t explored. There’s so much backstory that’s skimmed over that really would have added a lot.

Overall the story is just a bit too repetitive. Where there could have been a lot more character development or mythos building it falls back into Harper being consumed by her need for sex. While there’s a reason for that, it just becomes bland at points as a result. Giving the characters more personality and exploring the world of the succubi and incubi really needed to happen.There’s a number of threads that could have been expanded on and make this work so much better than it is.