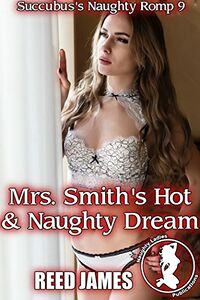 A review of the ninth work in the Succubus’s Naughty Romp series by Reed James today which brings with it, finally, some dearly needed exploration of Jezebel, the succubus of the series. That’s something I have been waiting for and it’s honestly about time.

It’s still a harem story, it’s still so very much about Trent falling to his desires. But there’s also the beginnings of telling what’s unpinning everything which gives me some hope things will turn towards something far more interesting.

Trent has never really experienced Jezebel’s powers, not really understanding what she is capable of. Being drawn into the ether, he learns what can be done within the dreams of others. But in doing so, Jezebel might be taking a risk for them both in the future.

The series presses on from the last work, immediately turning towards Jezebel and making her the focus of much of the story. There’s a really interesting tale woven by her in which her beliefs, desires and attitude towards the universe are explored.

It’s this revelation that is something I’ve been waiting for. Jezebel has been the tool for Trent’s desires, but she really hasn’t been able to tell about herself, about the mythos she exists in. That’s been a large hole in the series to this point and getting to know more about her brought the series from just being about sex to something a lot more interesting.

Still, beyond the climax, in the last few pages, there’s the appearance of a new character, one that seems to be intent on stopping Jezebel. Again, this is interesting as it offers a chance for the story to be more than a harem story finally. The author has done this sort of thing before in other series with succubi appearing, it would be nice for this story to take a different path if for no other reason than to make up for how long it’s taken for Jezebel to come to the fore.

Perhaps in the next few parts of the series, Trent should fade to the background and give Jezebel a chance to be everything I think she is and can be. Sex alone as a story isn’t interesting to me. But erotica with character growth and transformation really is.

Overall, this is the singular work in the series so far that intrigued me. Given Jezebel a chance to tell something of herself, of what and who she is really changes the story a lot. Beyond that, finding her to be challenged in the future offers a turn from being a harem story into something far better. Again this all comes back, for me at least, that a story about a succubus should have her more core to what’s happening. Hopefully this part of the series points to what comes next. I hope that’s less harem and more succubi.