Gongshow – Part I by TeraS

I’d rather have the toque overall

A Review of Midnight Visitor by Bonnie Atwell 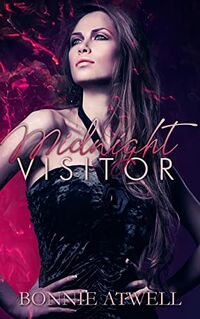 Succubi are, of course, the embodiment of the desires of the ones they come into contact with. That can be in many forms and wishes, from simple sex to complex needs for domination or submission. But in the same way, a succubus can be held, or trapped, in her own desires unspoken. It’s in that exploration of desires that things become so very unique.

Not everything is, or can be obvious when it comes to desires. The prey can be the hunter, the need can become all that matters. Sometimes the secret revealed is what the story revels in.

Xerora’s not like other succubi. She doesn’t sit on people while they sleep, and she doesn’t suck the life out of them. She could, if she wanted, drain someone to death. There were some of her kind that did such things. But Xerora much prefers to keep a list of the mortals who have fed her the best lust. That way, she can make return visits.
One night, the “trail of depravity” lures her to a quiet village she’s never visited before. There, she peeks in on a human named Colette.
Colette is the village baker. The villagers frown on her as a woman running her own business. But her baked goods are irresistible and addicting. Any man or woman would be lucky to become the object of the baker’s affections. But for some reason, Colette keeps to herself. She’s friendly to all of her customers, but she never pursues anything outside of business. The succubus Xerora, quite by accident, is about to find out why. She’ll get more than just one meal in the process.

Xerora loves being different as a succubus and really isn’t it more desirable to be pleasured than being evil? A chance passage to the mortal realm leads her to encounter Colette who offers something delicious to Xerora. But not everything is quite as it seems and both may discover something unexpected and delightful.

The work is a short hot flash of succubus erotica with a futa focus. The story moves quickly towards the two characters coming together. the events afterward and then the second climax which brings a twist in the story that’s well done and makes a lot of sense.

The world building is interesting, if somewhat quickly done however. Xerora’s home dimension might have been explored a bit more for my liking to show why she made the choices she did beyond simply her succubus needs. Xerora is not stereotypical in her character, there’s a lot of consideration, acceptance of herself as well. But really it’s the simple choice of being different from other succubi that I loved.

Through her encounters with Colette there’s a really well told exploration of Xerora’s personality and it shifts over the story. Being that Colette is a futa explains some of that, but it’s the reveal, at least partly, of what Colette is that explains so much.

There’s a fair amount of dominance and submission as part of the erotica that fits the characters. It’s not over the top or feels tacked on as well. I do think that it would have been interesting to see the other side of the story from Colette, the story is told from Xerora’s viewpoint.

There are a very few word errors here and there, nothing major, but another editing pass would catch them. Considering the world building, perhaps some time spent for Xerora to shadow Colette might have made the final scene more telling. Having Xerora be draw in, knowing she is, but not why might have give her character a but more depth. Similarly, Colette is something of a cypher that might have been delved into deeper to make their connection a more passionate thing.

Xerora is a lot of fun and the shifts in her character in the story really work well. I honestly would have liked to know more about Colette than what was told, she’s very interesting too. Perhaps there’s a possibility of another story to take their relationship further. That’s an interesting thought considering who Colette is and what Xerora needs.