Gongshow – Part I by TeraS

A Review of The Succubus: Fantasy Fairy Tales for Adults by Signy Sigurdson 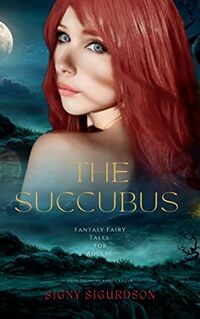 The Succubus: Fantasy Fairy Tales for Adults by Signy Sigurdson

The transformation of characters in a story through their relationship, understanding and discovery can be both telling and captivating. It’s not simply the shifting connections between them alone, for the emotions shared give more than desire, they bring unexpected revelations.

The path is never simple, the story isn’t clearcut by any means. Perhaps the single vision that matters most in such stores is that souls must be true to themselves, and each other, always.

Joey
Post torture my friend healed the physical scars, but the emotional scars remain. Hidden. I’m alone and scared. Until she comes…
“It’s odd, you know. Naked women seldom grace this house. Save the ones already living here.”
“Oh, I don’t live here.”
“I didn’t think you did.”
“Why are you afraid?”
“Because you’re a naked woman in my bed and I’ve never seen you before in my life. I’m either losing my mind and imagining you utterly, or there’s a nefarious purpose to your arrival. Either way, things don’t look good for me.”
“I won’t hurt you.”
“Thank you?”
“I like your hair.”
The surreal nature of our discussion isn’t lost on me. I nod at her.
“And I like your tits. OK?”
She smiles.
I don’t know what I expect. Not for her to actually wash my hair. Yet, I find my head hanging off the edge of the bed moments later, a steaming pail of water beneath it…

Regrettably, the book summary doesn’t give this work the due it deserves. It’s not a simple thing to describe by any means. Still, the summary might be: “Time is immaterial for succubi. The universe shifts around them, souls enter their orbit and then disappear into the void. But some souls call out, seeking release from their tragic reality in the arms of one that can love such wretches as they. Such souls cannot see their worth and if one can love, can believe that someone can love them, anything is possible. Even a succubi can dream of the impossible too.”

The work is a tale of belief in oneself, belief that there is such a thing as love, and what happens when both of those paths cross. While there is a scattering of erotica, it’s not the point of the work and honestly if there was more than there is, the story would be lessened by that.

The story is told from the perspective of the main character Joey who is a tragic figure overall. That’s not to say that he doesn’t change over time, nor is everything a lost cause. It’s a question of his life, the events that come and how Onda comes appears.

Onda is a very complex succubus character. She’s not stereotypical, her thoughtfulness, willing spirit and desire to be with Joey are layers that create a story about her that’s bot revealing and a mystery. The surprising reveal of who she is was unexpected, but made perfect sense. It also brought about some soul searching of her own that climaxed in a way that lifted both characters wonderfully.

The story engages, the characters have emotion and it’s a story that gathers itself over time. This isn’t a hot flash or a story that can be skimmed over. The dialogue matters, the mentioning of a look or action in passing comes back to tell something more. It’s this complexity that makes this such a unique tale by far.

A wonderfully told story, Onda and Joey’s story is both heartbreaking and joyful. A fully realized tale about love, compassion and what we will do for those we love. If there’s one part of the story that I would have liked to seem it would have been the time Onda was away before the final pages and what happened. That’s a part of the story that I think might have been told in a flashback and it should have. For in that moment I think Onda’s truth would tave been seen.