A Review of Special Order: The Fae Princess by B.B. Dale 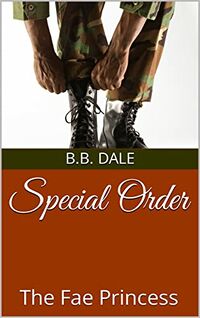 The development of a character, be they Succubi or Incubi or some other soul, can be so very captivating when done well. It’s in the change as time passes, the discovery of what matters most where they become something more by the end of the story.

In telling of their good and bad, their understanding and confusion, where a story can ground itself. It’s more than just a means of them being part of the story, it’s how they shape themselves and those that matter to them.

My master is a devil and he assigned me as a guardian to a small Fae Princess. To say that I am shocked would be an understatement. Why would this small female need a guardian? I think I get it. She is one part princess, one part tomboy, and one part foul mouth sword fighter. Not typical at all. She completely needs a guardian. I am an incubus and I think that she made me blush today. Her magic came and she is a powerhouse and she made me blush with her unladylike ways. We are hiding in the human realm and she needs to go back to Fairy and spread her wings. She needs to be more. I need to toss her out of the nest. I just, well I am attached and I need her out of the nest. I cannot be attached. She is more than anyone should be to me, and I am not accepting this at all. I won’t. I do not care what she says or thinks, she is not going to give me any kind of gifts, and no!

Titus has a problem and it’s the young, wild soul that he’s been charged wth watching over. But time has a way of changing one’s perspective and if you aren’t careful, the truth will not be something you can ignore or resist.

The work is a mixture of erotica, a coming of age tale and a glimmer of sword and sorcery that creates a very complex narrative for the characters to deal with. It’s a bit odd at times, the main character Camilla is a force onto herself and controls the story and where things go.

She’s delightfully unashamed in her will and personality which pushes events in some very unexpected ways that are a lot of fun. I’d have liked a bit of a clearer look into her thoughts at some points in the story, if for no other reason than to explain some of the things she does along the way. Yes she is a willful and wild soul, but with that comes something of a schemer and I’d have liked to seen more of that aspect of her.

Titus, the incubus of the work is just wonderful from the first to the last. He’s not stereotypical and that allows for him to have a conscious, be able to deal with the wild soul he’s been attached to, and yes, fall in love. Beyond that, there are shades as well within him that hide parts away and it’s in the tugging at his strings that his nature, and the love he holds for Camila comes wonderfully through.

The story does, at times, turn sideways into paths and events that seem not to make a lot of sense, but in time the pieces fall together well. The erotica has some lovely heat when it appears, there’s passion in moments when Titus has to face his truth as do the other characters in the story.

The flow of the story twists in and around itself many times, there’s a very well placed surprise for the characters towards the climax that just told of how much of a schemer Camila is. But that’s not a bad thing for it reveals who she is beneath the wild soul and what she’s always wanted.

It’s a very quirky story that has a lot of humour, passion, need and love. Camilla is just a fascinating character, her personality of course takes over the story. For me, Titus is just more interesting to sort out and see where his path goes. The story is fully told, but there are some threads dangling at the close that could be explored and perhaps they should be.