Succubi Image of the Week 762

A Review of The Bimbo Stopwatch by Cindy Lapel 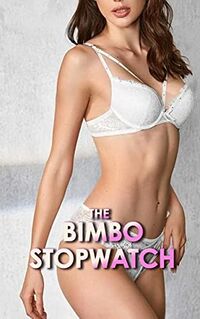 The Bimbo Stopwatch by Cindy Lapel

Succubi appear in magic stories quite often. They give rise to the desires of others or claim them for themselves. Being background, or a means to push the plot forwards has a tendency to leave their own story lacking as a whole.

When a delightfully fun succubus seductress appears and isn’t really given something of a larger presence, it’s a shame. If she’s important to the story, shouldn’t she be part of it more?

A succubus magically gifts a time-stopping watch to a man in need. Suddenly, he can master powerful forces — including harem and bimbo dreams he’d never imagined. Will he finally be able to achieve the woman of his wildest desires, or will he give in to pure arousal and lust?

One should be concerned when a succubus offers something with seemingly no strings attached, but Ben didn’t know Lillith was anything but sexy at the time. A simple watch, but given the power to stop time by Lillith herself opens his desires to become true. But what does Lillith get out of the deal and can Ben even resist the power?

Lillith, the succubus of the story, really isn’t evil or stereotypical. She’s naughty without doubt, there’s a need driving her to give Ben the watch that makes a lot of sense. Very much a seductress, her form is very sexy, her actions and voice are perfect for who she is.

But this isn’t Lillith’s story and she is very much a background character that pushes the plot forwards on occasion. It’s a shame as in the beginning there’s a lot explored about her, the store she owns and the delight she has in watching Ben’s desires take over. When Lillith appears she brings a lot of fun and light to the storytelling. It would have been amusing to have a reveal of her using her powers to direct Ben’s actions or perhaps ensnare Ben into her collection. Either would have been interesting.

Overall the erotica has a adult movie time with some comedy assets that works well. Some of the dialogue reads flat when it should be passionate however. As well in many moments the story drags on too long in the voyur aspects of Ben’s story. Perhaps tightening up the storytelling would allow for more character development than happens which would help.

This isn’t that much of a succubus story, regardless of how delightfully naughty Lillith is. I’d honestly like to see another work mainly about her, telling her past and allowing more of her creations to be explored. That said, otherwise the work tells a good timestop story, if somewhat silly at times.