Succubi Image of the Week 759

A Review of Monster in My Closet Mates a Succubus by Wanda Violet O. 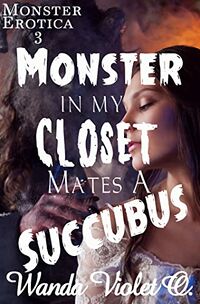 Monster in My Closet Mates a Succubus by Wanda Violet O.

I think it’s interesting to watch as a mortal character becomes a succubus in such stories. Beyond the erotica, it’s the transformation of who they are, what their attitude is, that brings something more to the story. While the sex, in whatever means that is, powers their change, it’s seeing them come to realize what hold they have over others. and what they do with it, which I think offers something far more interesting.

A review then of the third work in the Monster World series by Wanda Violet O. There’s always something to question about oneself, the problem is when no one is willing to give the answers. but are perfectly willing to push you beyond your limits.

It’s been one hell of a day. First, I met the monster in my closet. He demanded I lose my virginity before he came for me last night. I’m new to this world, but I know I’ve somehow changed, and my life will never be the same. Something is happening. I’m stronger than anyone I know. I may be a pet, but if left on her own, this pet gets destructive…

There’s something of a disconnect with what happens and the things the demons say to Wyn that bothered me. Perhaps that’s a bit too much of a demanding tone from them, or it’s the resistance in being able to see what Wyn is becoming. Either way it took something away from the story as a result.

Wyn’s transformation isn’t really a physical one. She doesn’t gain horns or a tail, she doesn’t become physically a succubus. Her attitude does shift in a delightfully dominant succubus tone which pushes the other characters over the edge which worked well. The focus in on her sexual needs taking control and giving rise to her powers as a succubus to draw others to her and, to a point, bend then to her will.

The author does note that the work shouldn’t be expected to have character development or much else other than the raw erotica. I think that’s not quite right. Wyn does change, she grows as a character, and she’s not who she was at the close. The demons that are main characters change slightly as well.

I really wish that Wyn had passed through some physical transformations to become a full succubus. I think that’s the single thing that’s missing for me. Perhaps there might be something more that could appear with these characters. Perhaps the hints of Wyn being a powerful succubus could be a story on it’s own. The erotica is fun, but there’s so much more than could have been done.

As a hot flash of succubus erotica, the story has some promise. It’s just a shame that with all that Wyn represents and where the story comes to a close, it wasn’t explored. It would have been interesting to have an epilogue with Wyn as a succubus mistress being served by those that lust for her. But it’s an interesting thing to think about.